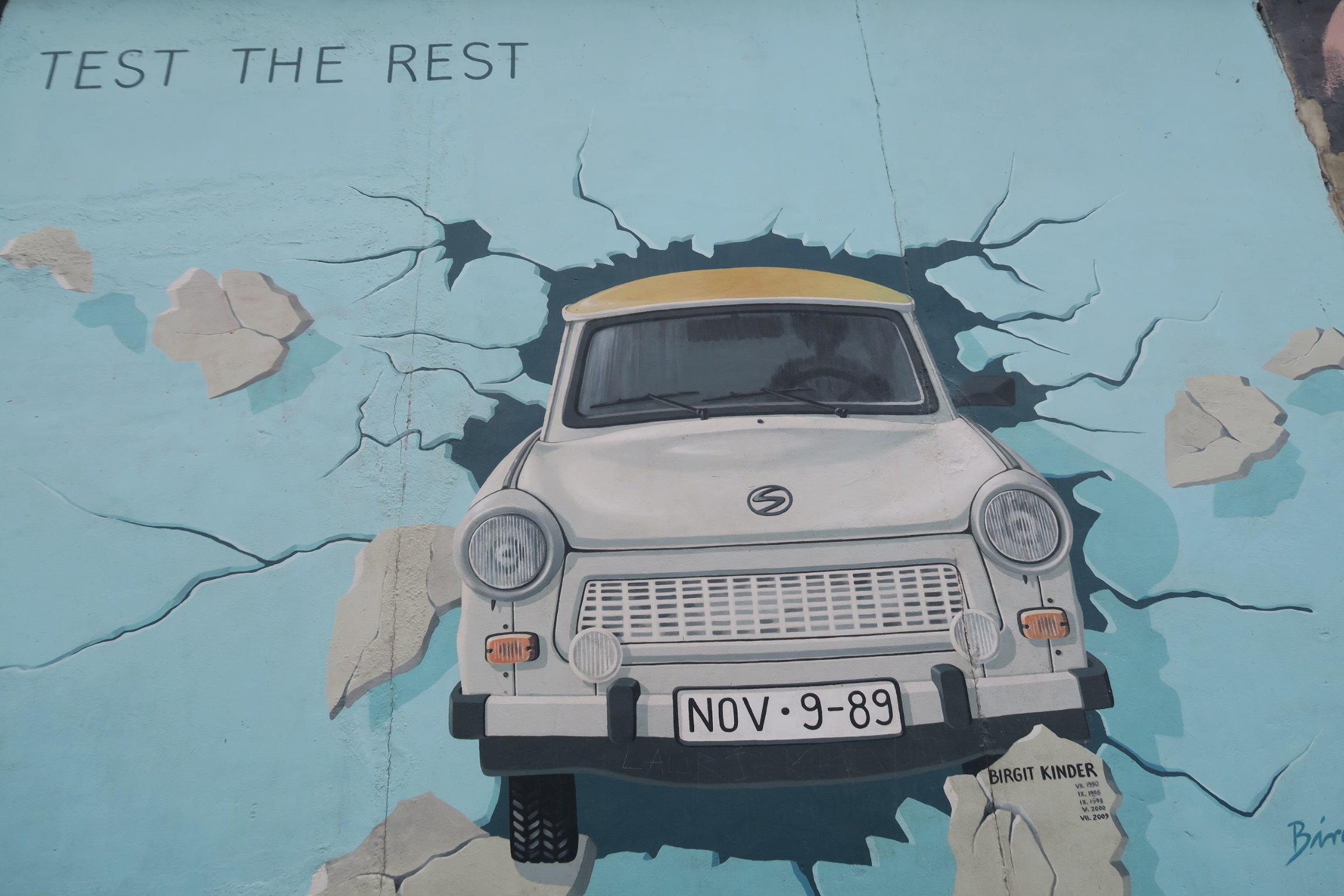 jojo:
what do i like?
-not being bed/couchridden and actually being able to explore the town
-the subway system – it reminds me a lot of tokyo with a seemingly endless number of connected lines but all accessible with one daily pass.  it’s sooo easy to get around town
-ethnic diversity in our meals for the first 24 hours – we ate persian, jewish, lebanese and taiwanese (believe it) for our first four meals

-so much history to look at.  my cousin brought us back a piece of the berlin wall almost 30 years ago and we finally got a chance to see what was left of it in the eastside gallery

-if that’s not enough, how about this being one of the first experiences with the german language that i can recall…

what do i dislike?
-that my stomach isn’t 100% up to the task of indulging in some hardcore, german gutbombs of meals
-i had expected slightly nicer aesthetics in terms of architecture and design but i may have gotten my cities mixed up.  so far, berlin reminds me a lot of my university days; the university known for one of canada’s highest suicide rates thanks in part to it’s glamourously prison-like architecture

what do i like/dislike about the new accomodations?
-love this place.  with airbnbs not being received too well by the german government, we’re back in a hotel with the best bed i’ve slept in in over a month.  for the first time in over 30 days, i finally woke up without feeling like a pretzel (which i plan to eat many of this week).  the place smells nice, has both dry & wet saunas and…. bathrobes.

biggest adjustments from the previous stop?
-prices are about 25-50% more expensive than the czech republic being back on the euro again
-the city is also a lot greyer than prague but still great to look at for different reasons

what was our first meal?
-olivengarten (NOT an olive garden) for our first taste of persian food since vancouver.  we used to eat it at least once a week and we got our goto dishes…

tasted almost exactly the same, i might even say that these were juicier than we we get back at home, which is saying a lot!

overall impressions?
we came into berlin having booked five nights at this particular hotel with no idea where the rest of our summer will take us after this city.  we had briefly thought about extending our stay here to 10 days but now i’m feeling like that would be far too long in this city.  i’m think we’ll get our fill of berlin but don’t know if i’d last much longer than a week here.  now that we’re in germany, i’ve got the itch to check out more cities.   being back in any country that’s on the euro seems to really strap us down.  money goes quickly even though berlin is still cheaper than many other cities we’ve visited such as barcelona.  the sights are also cheap/free for the most part.  i guess this is where we benefit from them losing ww ii.

Very ethnically diverse. It’s nice not being the only Asians around. Lots of different neighbourhoods to explore with a very good transit system to get around the city.

The crosswalk signs change very quickly, the signal changes from green to red when I’m in the middle of the crosswalk, without any warning that it will be changing. Either Berliners walk extremely fast or the signals are just a guideline, not meant to be strictly adhered to.

So nice to be in a hotel, feel super pampered with a shower that has no issues and having someone make the bed for us. Berlin is a major city, tons more people. There are numerous metro lines, some underground, some aboveground, multiple trains leaving from the same platform, etc. Takes getting used to.

Persian food which we have not had since moving from downtown. It’s a nice change. We also went to have taiwanese noodles but was disappointed to find that the noodles are nowhere near any beef noodles we’ve had. Five days will not be enough to really get to know Berlin but we likely won’t stay longer as it’s more expensive than our budget allows, especially not being able to rely on Airbnb to bring costs down.