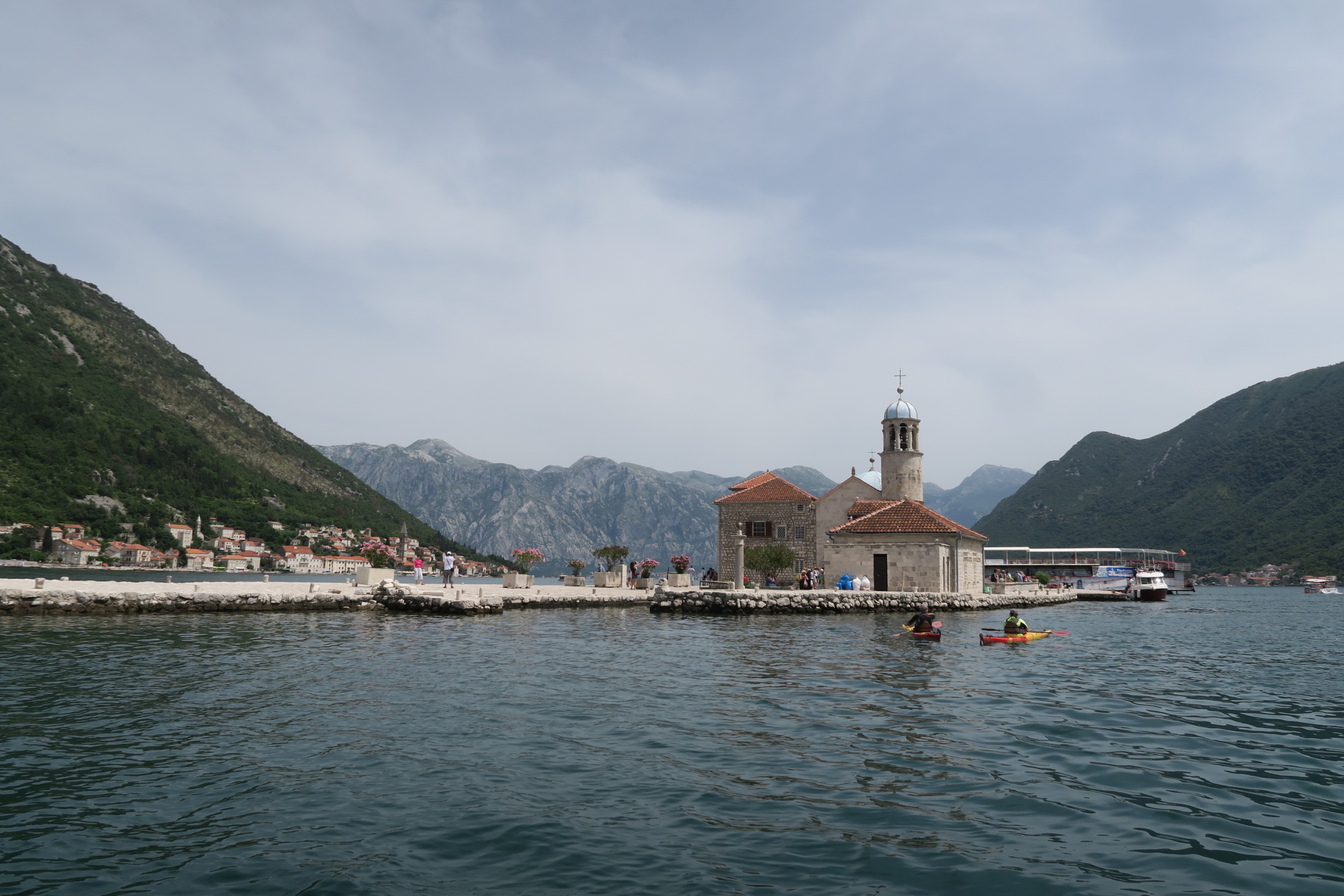 our next stop after tirana was the small historical town of kotor in montenegro.  montenegro borders albania to the north and by bus it took us roughly six hours to get there from tirana.  this marked the end of our string of long bus rides and we were really happy to set our feet down in kotor for five days.

the bus ride was very scenic once we got to the montenegro side as we drove up the coastline for the last hour of the ride.  beautiful white and blue beaches were sprinkled along the riviera for as far as the eye could see.  but alas, it was not meant for us 🙁

kotor is a small town that is located in a submerged valley which some people consider to be a fjord.  translation: it’s surrounded by mountain ranges on all but one side which is the bay of kotor.  so there’s only one road on either side of kotor leading in and out.  we came through a tunnel via bus and were greeted by towering grey limestone mountains with some city walls running up one mountain above the old town. we hadn’t realized that kotor was so small so we accepted our airbnb host’s offer of picking us up from the bus terminal.  he literally drove two minutes down the street and dropped us off at our unit.

he strongly recommended that we visit the small town of perast north of kotor so that’s just what we did the next day.  a 30 minute bus ride dropped us off in the tiny strip town of perast.  the population is roughly 500 and it is strictly a tourist town in this day and age. perast is a small port town that is best known nowadays for its two islets just off the the coast.  out of these two small islands, one is natural and the other is manmade.

the natural islet is home to a the st george benedictine monastery which is not open to the public.  however the manmade islet, named ‘our lady of the rocks’ hosts a roman catholic church, museum and gift shop.  why was it man made?  well, the story/myth goes like so… sometime ago, sailors had found this painting of the madonna perched on a small rock in this location.  they took that as a sign and felt that it was fate that this painting had come to be found here and they wanted it to remain at said location.  so as part of a pact, they began to build the island by throwing rocks to expand the islet slowly by slowly.  a rock was thrown after each sailor had come back from a voyage safely and after a few sunken ships to speed along the process, the current islet was completed in 1632, 180 years after the painting was found.

the church is very small and ornately decorated with paintings, an antique organ and many pieces of silver which were gifted to the lady of the rocks by returning sailors, even to this day. there is also one tapestry on display from a lady who lived in perast and had hand woven a piece over 25 years using gold and silver fibres as well as strands of her own hair.  the detailing on this tapestry is amazing.  over the time she was working on this piece, she had been waiting for her love to return home however she eventually went blind while working on it. we really enjoyed the lady of the rocks.  we found it funny that the guide for the small church, prior to paying our one euro entrance fee, told us that there wasn’t much of a story to the church however we would get it once we paid… and it turned out to be more interesting than most other churches that were 100x the size and much more expensive!