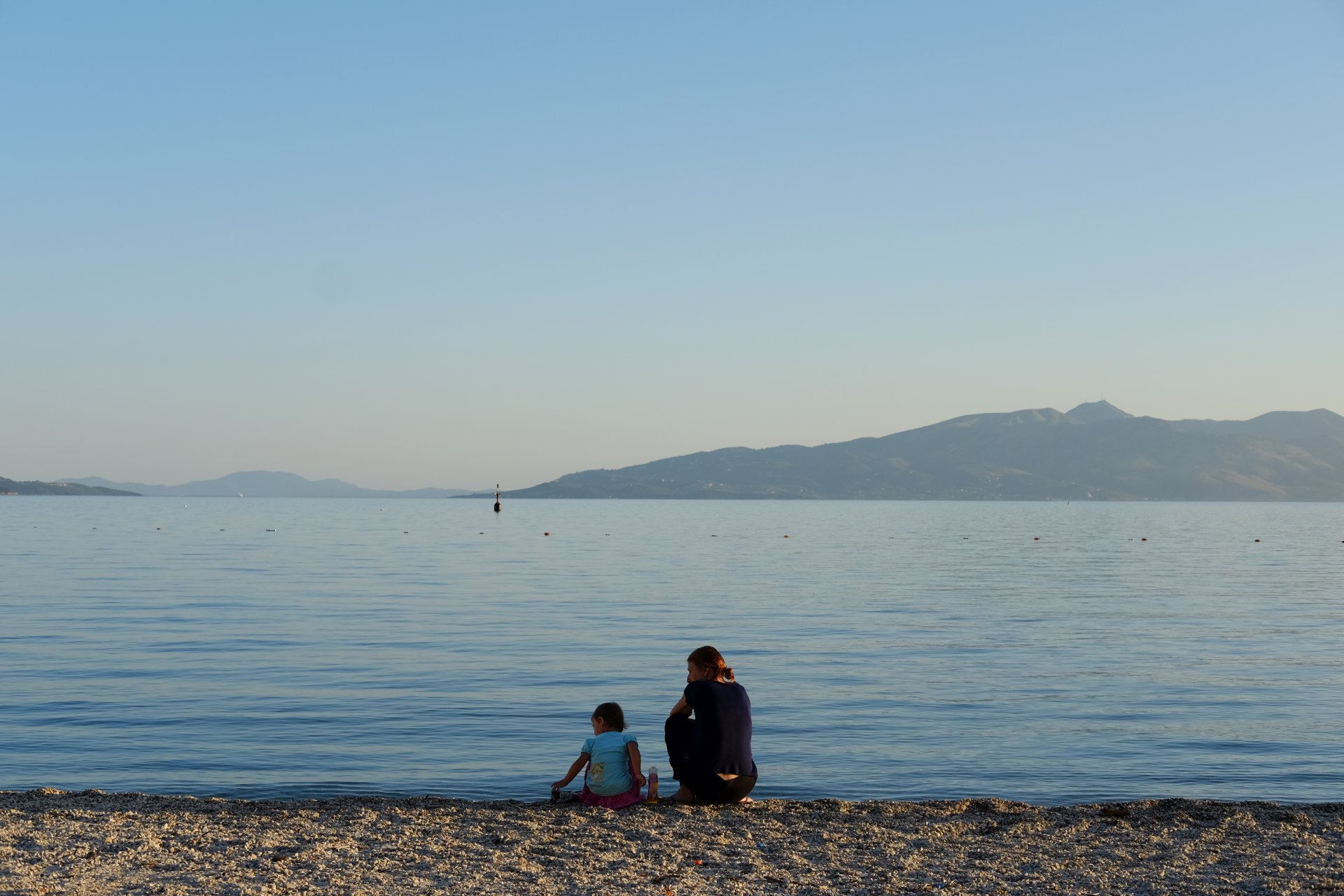 the main promenade of sarandë looked to be the most built up area of town* that we’ve seen during our stay in town.  it’s one of the longest stretches of uninterrupted waterfront property we saw and it stands out a lot from the older areas of town.  stands out by a LOT.

the promenade had everything you’d expect from a waterfront: restaurants, bars, patios, souvenir shops, a beach area.  it’s also a great area to people watch.  in a city of only 40,000 people, many of those locals hang out along this strip towards the evening once the sun goes down.  it gets so blazing hot in the day that many stay within the shaded confines of their home and spend the evenings stretching their legs with their friends.  kids were out running around till well after 11pm on a weeknight (sigh, wish i could’ve grown up in europe) and the senior men dress up in their slacks, dress pants, suspenders (if they aren’t wearing a suit already) as well as hats and walk up and down the strip like they own it.  what a difference from asia!

the beachfront is made up of small pebbles and curls around in a bay shape.  the waters are very calm and you can definitely go for a dip if you like, which j did just for the sake of doing so but we spent our time in the water elsewhere.  i’ll add more on that shortly as the beaches of albania warrant more detail than just a paragraph or two.

as the town itself is only about 4 blocks wide, we had a few dinners in this area.  hard to say no when the patios give you sunset views and the prices are marginally more than restaurants around town (600lek/6cad gets you a large, thin crust, brick oven made pizza) with much larger menus.  none of us knew what to expect from this country and we were all surprised to see that almost all menus around town would have pasta/brick oven pizza listed; italy was a large influence upon their culture and they’ve adopted all the skills to make the staples from their neighbours.  we were equally shocked to find that there was very little greek food around town especially since they were only 30 minutes from corfu. being next to the ionian sea also brings the seafood in in droves.  fresh mussels, squad, octopus and fish are plentiful and some are just as cheap as a pizza.  meal after meal, we continued to be surprised by how much albania has to offer up.

albania had also made it into the ongoing euro cup tournament for the first time ever and we watched one of their games at limani, possibly the largest and best known restaurant in town which is roughly the size of any cactus club/milestones.  i don’t know much about soccer/football but i do know that it’s a pretty big deal in europe and even moreso to a nation like albania that is making their debut.  this night, albania was matched up against the overwhelming favourite, euro cup host & powerhouse, france.  through about 65 minutes, albania was aggresssive and played the french to a tie which as boring as it might sound, meant that they kept the beasts at bay and even had many scoring chances of their own.  everybody was glued to the tv, even the waiters and people behind the counter.

alas it wasn’t meant to be on this night.  france turned up the heat towards the end and closed out the match 2-0.  very unfortunate but i felt like this match showed their character and toughness.  they’re on the cusp of becoming well known on the world stage and showed up to put their best food forward.  i think the same can be said of this country with regards to tourism.  not to take away from greece’s much needed tourism revenue but it’s only a hop skip and a jump from albania.

*note: in a building that was not half completed and left for dead within the last five years as albania has an addiction to half built buildings