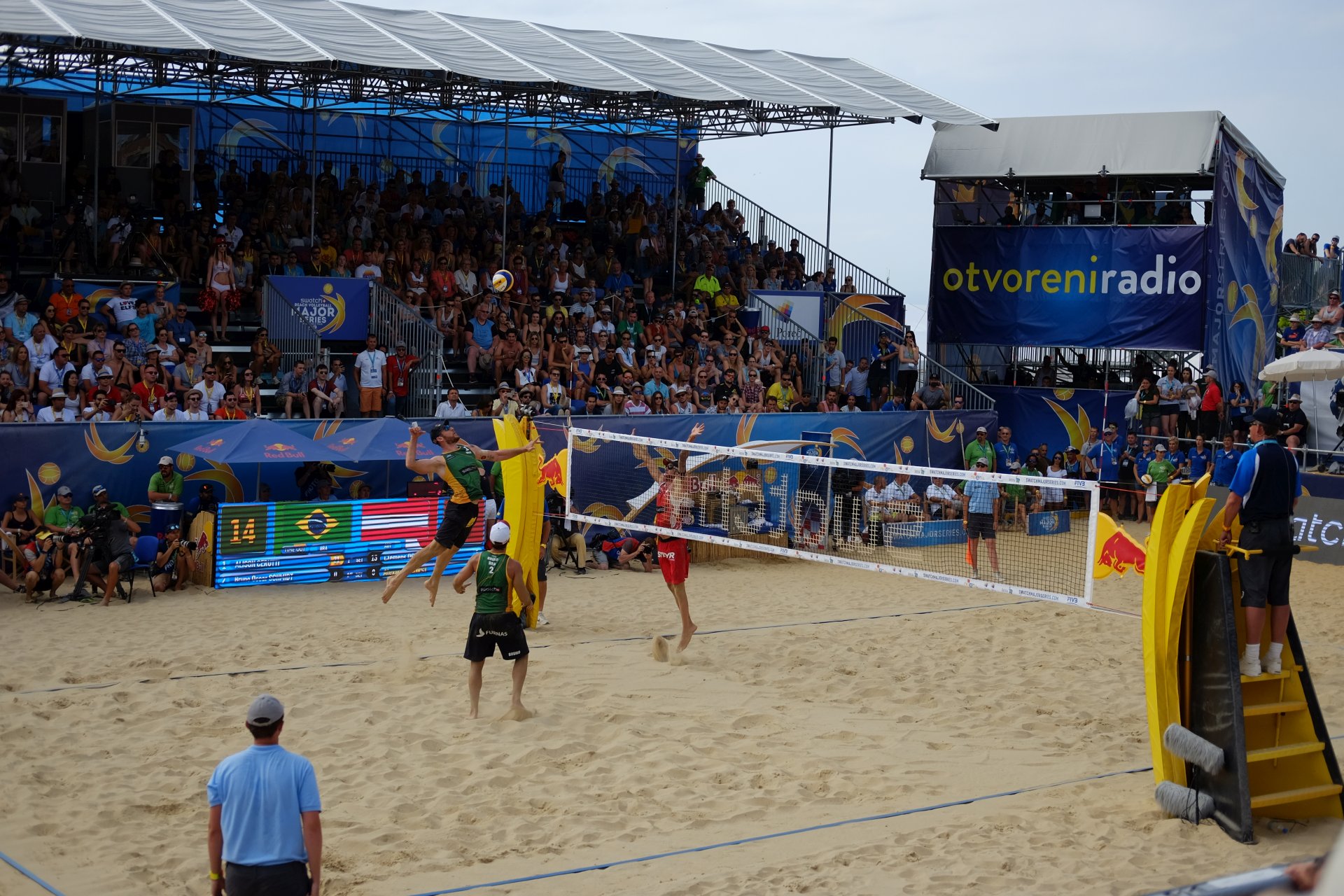 jojo:
what do i like?
-beach town vibe.  with every city/town we’ve moved to within croatia, the vibe has gotten more and more relaxed.  we’ve been on the go a lot over the last week, covering over 1000km by car and a bit more by bus and hanging around somewhere relaxed will be nice
-getting here, although long, was a fun drive.  there’s so many tunnels in croatia and they’re all so well maintained.  each one is named, has good signage, is quite new and some run longer than 5km.  pretty cool
-we arrived on the second last day that the professional volleyball tour was passing through town and were able to watch canada beat latvia for third place and brasil beat austria in the finals.  without a doubt the highest level of volleyball that i’ve witnessed.  soooo wishing i was 6 feet tall now

-a waterfront gallery of croatia’s scenery was on display as well.  everything we’ve seen has been amazing yet there’s so much more out there.  this country looks great in the summer and even more serene in the winter and foggy haze (so many monestaries/fortresses/churches perched above the clouds)

what do i dislike?
-not much about the city.  prices are yet even cheaper than split though having fewer dining options is apparent
-dining options as an anti-pescatarian.  not eating seafood is one thing.  avoiding places that can cross contaminate it is a nightmare.  i had no idea it was going to be this difficult (unless i’m on a 100% pizza diet).  it’s actually been even harder than dining in japan and hong kong.

what do i like/dislike about the new accomodations?
-the town is small so we’re about a 5 min drive from the waterfront/old town area.  our kitchen is quite small and basic and bordering on unusable aside from one-pot meals.  our bedroom is about 3x the size of the kitchen and we’ve actually got a king size bed.  i don’t even know what to do with this much space.  nothing fancy about this place to recap.  seriously, NOTHING fancy.

biggest adjustments from the previous stop?
well technically lake plitvice was our previous stop for one night.  we skipped the ‘first 24 hours in…’ post since we were barely there for 12 hours and there wasn’t anything memorable about it aside from my awesome truffle spaghetti dinner, meeting our airbnb host who looked like a splitting image of tyrion’s dead girlfriend (game of thrones reference for you readers who have more of a life than me) and visiting so many waterfalls in one park that i’m officially done with waterfalls for the rest of the summer.  so adjustments from our last airbnb is that we are actually closer than 2.5km to the nearest restaurant.  we were out in the middle of nowhere but the oddest thing was that we were in the middle of nowhere with other people.  hicktown/hobbitville life was fun for a night.

what was our first meal?
-pizzeria nono very close to porec’s old town.  their pizzas came highly recommended and they lived up to the hype.  we’ve had a lot of pizzas during this european portion (god knows that i have… having not been able to eat any seafood means that i’ve had a hardcore pasta & pizza diet) and this crust was right up there at the top.  size was… masive.  i’d liken it to an elephant’s ear.  it was brought out on a wooden serving board and was hanging over the sides like a muffin top.  and finally, the toppings… they offer the awesome option of being able to split your pizzas with two types of toppings so on one side we opted for the contandina (tomato paste, oregano, cheese & scrambled eggs) and… drumroll… truffle sauce.   horrible to look at as it has all the physical qualities of dog vomit but the taste was gloriously creamy, heavy and extra fragrant.  this was my second dinner in a row involving truffles and i’m super excited to spend the next few days in this area of the country that is famous for truffle harvesting. the sad part of this dinner was that thanks to my annoying shellfish allergy, i’ve broken out thanks to some cross contamination and i barely swallowed two pieces of this pizza before i couldn’t bear the pain anymore.  dining at seafood restaurants has caught up with me and hopefully i can leave croatia without finding out how an epipen actually works.  my throat feels like it’s housing a golfball with razorblades sticking out of the sides.

overall impressions?
i like porec and am looking forward to doing short (keyword: SHORT.  anything involving driving in croatia has turned out to be 25-50% longer than estimated) daytrips around the area, indulging in some truffle madness, catching some rays on the small but sunny pebble beaches and visiting the recently opened craft brewery ‘bula beer’ just around the corner from our airbnb.

Porec is touristy but there are no tour groups passing through. We noticed that as we strolled through old town. I think Joe and I were the only Asians.

Food isn’t great here in Porec. All the restaurants have the same things, grilled meats, seafood and pasta. The quality isn’t great either. I’ve had to order my default basic spaghetti with tomato sauce and even that came out blend and underwhelming. It felt like the cook dumped tomato sauce straight from a can on spaghetti and miced it. I know I could make a better pasta.

The unit is functional, has a washer and a nice patio. There is no livingroom so the patio  benches outside is the next best thing.

I wasn’t able to find any books in English. Actually Porec is pretty small, I couldn’t even find a bookstore. I was surprised Porec even has a Benetton store, seems so out of place.

The truffle pizza was great! So simple but so delicious.

Porec seems like a very laidback town. Catching the volleyball tourney was awesome. It made me miss summer volleyball sessions at Spanish Banks.