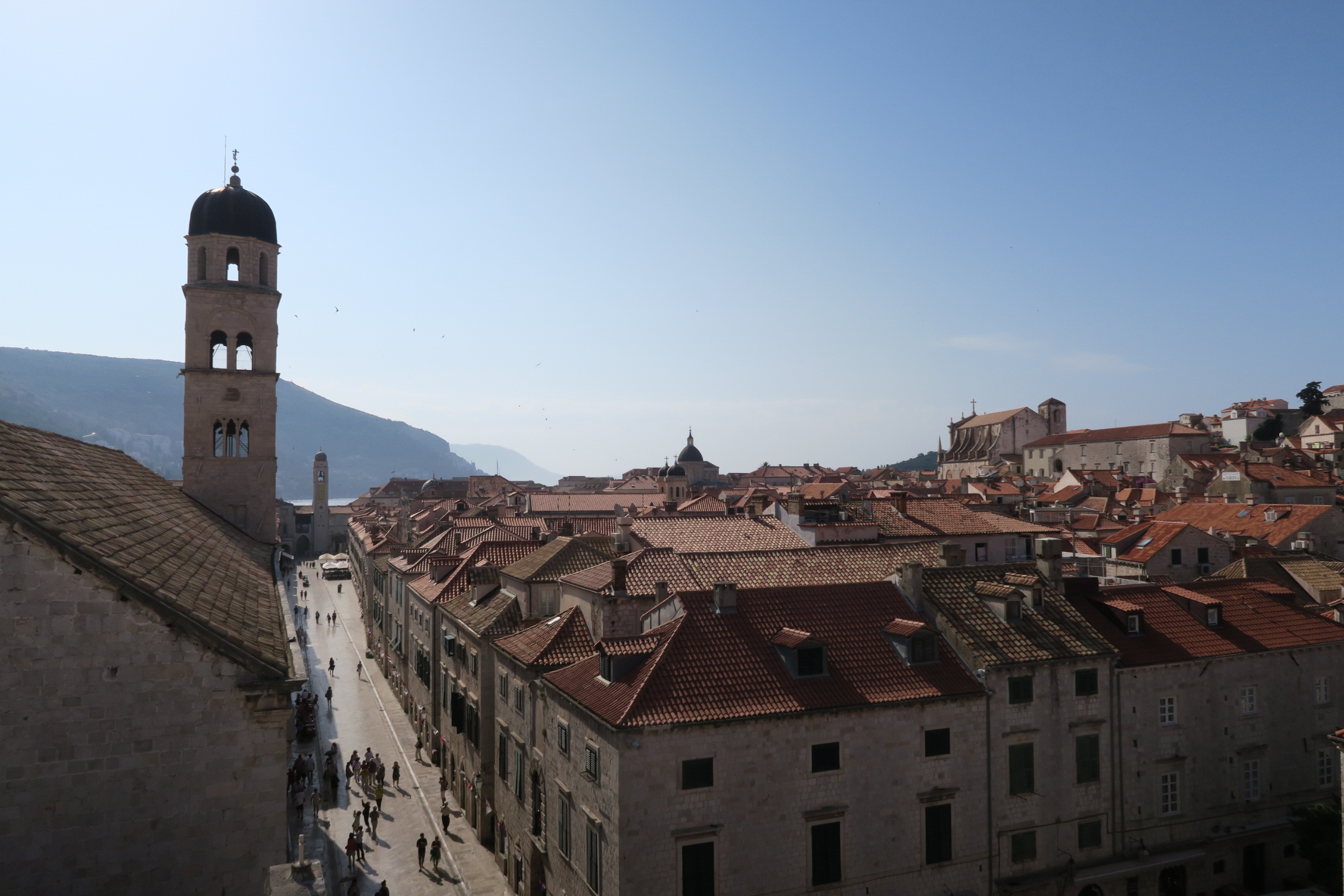 jojo:
what do i like?
-KING’S LANDING!
-in all seriousness, out of all the old towns that we’ve been to, dubrovnik is quite amazing.  the city walls were originally built in the 7th century and fortified throughout the 12th-17th centuries.  the walls run up to 25m high and 1,940m long.  ridiciulously impressive that they are still fully intact in this day and age. -along with kotor, the old town is immaculately maintained.  one of the most picturesque cities i have seen in a long time with the size of it working to its advantage as well as being situated on a coast with stunning blue waters
-excited to be in croatia, i’ve been wanting to come here for a long time to explore the country and we finally made it.

what do i dislike?
-i hate to sound like a broken record but these crowds are atrocious.  every bus we’ve taken has been packed to the hilt and we’re only on the cusp of high season.  every person we’ve chatted up has brought up the same criticism without any provocation by us so it’s good to know that i’m not alone in my misery
-the heat is crushing my will to live.  we were in the mid 30s on our first day and although the second day was supposed to be a drop in temps, it definitely didn’t feel like it.  add in 94% humidity and walking along the city wall with zero shade for two hours and jumping 50 feet to a cobblestone sidewalk starts to sound pretty appealing

-prices are higher here than in kotor.  the food quality has been better too but when pasta is better and cheaper in italy, i think that’s a clear sign that tourism is KILLING it here in dubrovnik.
-all of us are still missing saranda.  having to work to communicate with people when neither parties really speak the opposite language is really charming and maybe my new favourite thing about traveling.  maybe that’s why we liked portugal and japan so much too.
-customer service is, how can i say this politely, kind of dickish here.  jay actually had some prick make a snide, condescending comment to him after he politely declined five of this guy’s offers to sell him some form of drink.  aside from that prick, people have been nice but the city doesn’t have a very warm vibe.

what do i like/dislike about the new accomodations?
-this unit is a ground unit facing a garden so we get no sun at all.  somewhat depressing since we’ve had such nice airbnbs lately especially after seeing the unit that j-lo got just down the street from us.  gorgeous harbour view with a great vantage of the sunset

-as for our place, haha and i are back to the double twin bed arrangement of asia, i saw a multilegged creepy crawly run up next to me while i was blogging away last night and the bathroom is very cozy with one of the tightest showers i’ve ever been in without a door.  having said that, it’s the first shower in more than a month that’s actually worked properly, not leaked, had scalding hot water at our disposal and drained as it should.  #showergoals biggest adjustments from the previous stop?
-as we’ve made our way north from albania, the prices have been slowly creeping upwards as have the crowds.  to deal with them we’re just planning to schedule our days accordingly.  sightseeing in the morning and getting out of the city center for the afternoons.  haha and myself’s dainty budget is being put to the test here and we’re somewhat biding our time for a few days until we get our rental car and drive north to… TRUFFLE HEAVEN!

what was our first meal?
-spaghetti carbonara for me.  in a city that prides itself on seafood (and a lot of it for the hungry mobs of diners), my options are going to be limited going forward.  i’ve come across restaurants where everything on the menu has the potential to kill me.  literally.  i’m carrying my epipen with me EVERYWHERE this leg.

overall impressions?
it pains me to say it but after one day, i can’t say that i’m in love with dubrovnik.   had we come here as our first stop i feel like this answer might be different but we’ve seen nicer beaches, eaten at better value restaurants and seen attractions equally as amazing if not moreso with less crowds.  i can sense the negative nelly being written all over my face at random times throughout the day and i’m trying hard to fight it but as a girl we ran into at in kotor said “being in dubrovnik just makes me mad when i see all the people”.  and so she left for montenegro.  another lady from london who seemed well traveled came here on a whim and had sticker shock when dining out.  yes, from LONDON, the land that is more expensive than 99% of worldwide travel destinations.  there are a lot of cats though ^_^

Total Game of Thrones geek mode on as we arrived to the city. Can’t help but be total fan girl. Every corner and alleyway I’m walking through, I keep thinking how familiar it looks. Probably all in my head.

It is soooo hot here. I complained about Kotor being hot, I take it back. Dubrovnik is HOT! It reached 34°C yesterday. I was drenched in sweat. Had sweat running down my chin. Luckily we found a cliffside bar to cool ourselves down before our brains melted.

It’s very cozy here. And we are back to twin beds. Can’t complain though as our airbnb is $72 CDN a night. The cost will offset our expensive meals in Dubrovnik.

Meals are so expensive here, averaging  $25-30 CDN per meal. Cup of coffee is $7 CDN. I will be ordering the cheapest items on the menu going forward. This is good for my diet since I’ll be eating less.

I had goulash with rice. I had so much sticker shock, I didn’t order anything else with it. Despite the horde of tourists and the summer heat, I still like Dubrovnik. It’s a beautiful old town with amazing views and architecture. There is reason why it’s so popular. I compare it to going to Disneyland, it’s like a theme park. You know it’s going to be insanely crowded, with long waits at each ride and expensive meals in themed restaurants but your heart still speeds up knowing that you will be seeing Mikey somewhere near Cinderella’s castle. In Dubrovnik, I get to be a total tourist and sit on the Iron Throne. 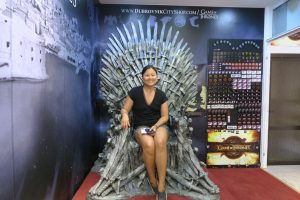 One thought on “first 24 hours in dubrovnik”