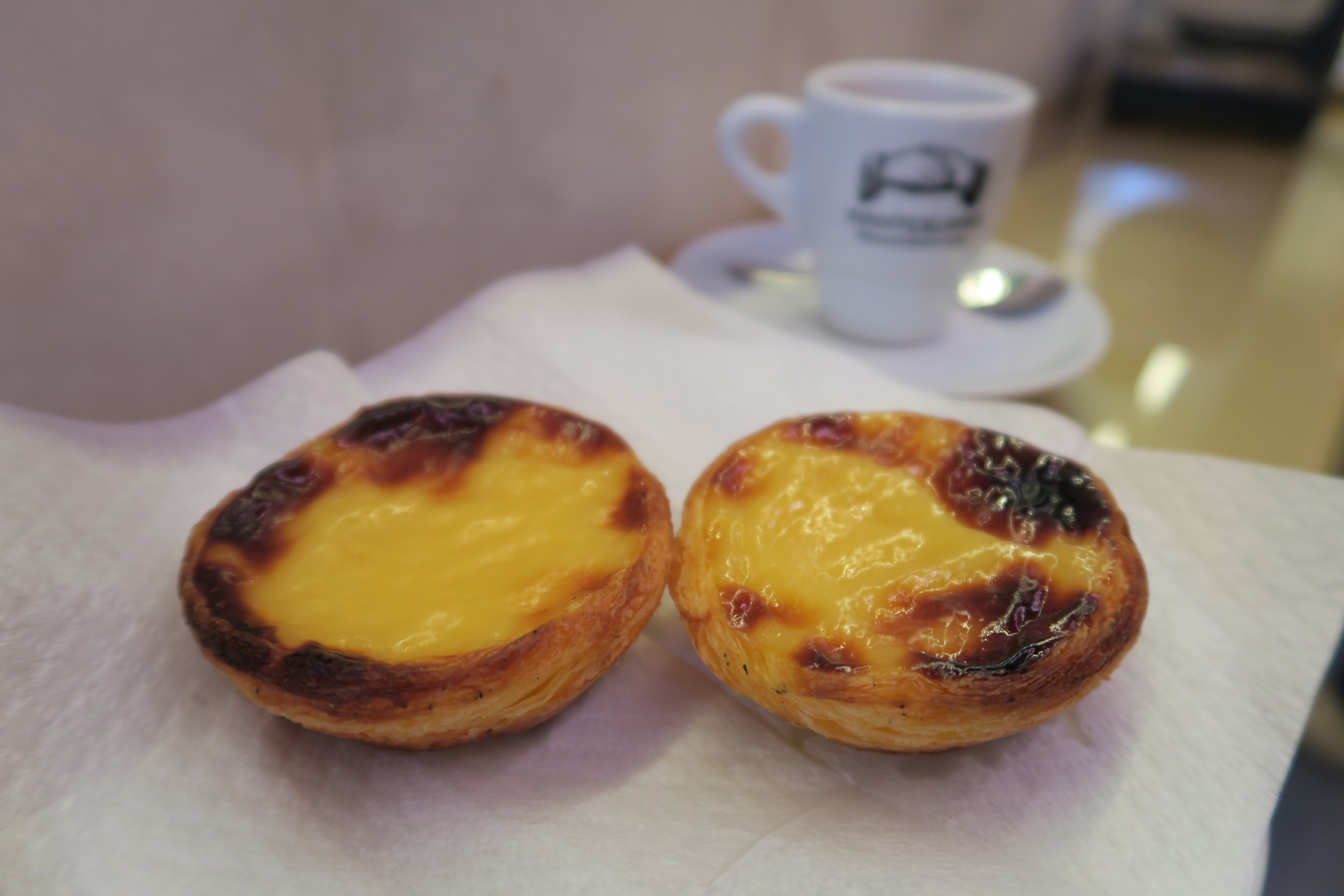 Since our sampling of the most famous Portuguese tarts in Macau, we of course had to try them in their native land. They are known as pastel de nata and we ate a lot of them all for the sake of research of course. The stand out ones are listed below.

Our first one we had in Porto was at the Padaria Ribeiro bakery. We happen to walk by the bakey and it looked very inviting from the outside. We had our natas on the counter along with couple of other local patrons. We were a bit surprised by the texture of the nata as they were very different from the ones we had in Macau.  The Portuguese nata crust is made of very flaky buttery layers and the filling is softer and lighter than the Macau ones.

The filling of the nata we had at Confeitaria do Balhao in Porto was even more runny.

Once we got to Lisbon, we made our way to Antiga Confeitaria de Belem. This bakery has been in operation since 1837 and believed to be the originator of this pastry. When we got to the bakery, the place was packed with tourists. Line up went out the door and it was chaotic at the ordering and pick up counter. The staff taking the orders looked like they hated every minute they were stuck behind the counter. I got pretty cranky by the time we got our order of 6 natas in our hands. Yes, we ordered 6 natas because we felt that we had to order enough to make it worthwhile to go through line up hell. Even though the restaurant portion of the bakery was huge, there was a 20 minute wait for a table. We decided to take our half dozen to the park nearby instead.

We definitely did not need to eat 3 natas each lol. It did give us a really good tasting of the Belem natas. The crust was very buttery and on the saltier side. The custard filling has the “curdled” consistency and was a bit runny, maybe because they were fresh from the oven and didn’t have a chance to cool yet. Overall we really enjoyed them despite having to brave the crowds to get them.

Our second sampling was from Confeitaria Nacional, Jojo had brought some home as take out. They were decent but didn’t give us the *er*m*gawd taste. The crust was not as flaky and the filling was a bit too sweet.

Our final nata destination was Manteigaria Fabrica de Pasteis de Nata. Right from the start, we liked the bakery. It was busy but not crowded and the servers were very friendly and attentive. It was standing room only with a large section of the counter set against the baking area where we can watch the bakers making tiny rounds of nata perfection. By far the natas here were the best we tasted. The flaky crust was the perfect level of buttery saltiness. The filling was curdled just enough not to be runny and was the right amount of sweetness. We ordered two to start and very quickly finished both. It was really tough for us to limit our second order to just one to share between the two of us.

We loved the natas from Manteigaria so much that we went back two more times, once for take away. And the quality and taste of the natas remained the same. Absolutely delicious!

I Believe in Miracles