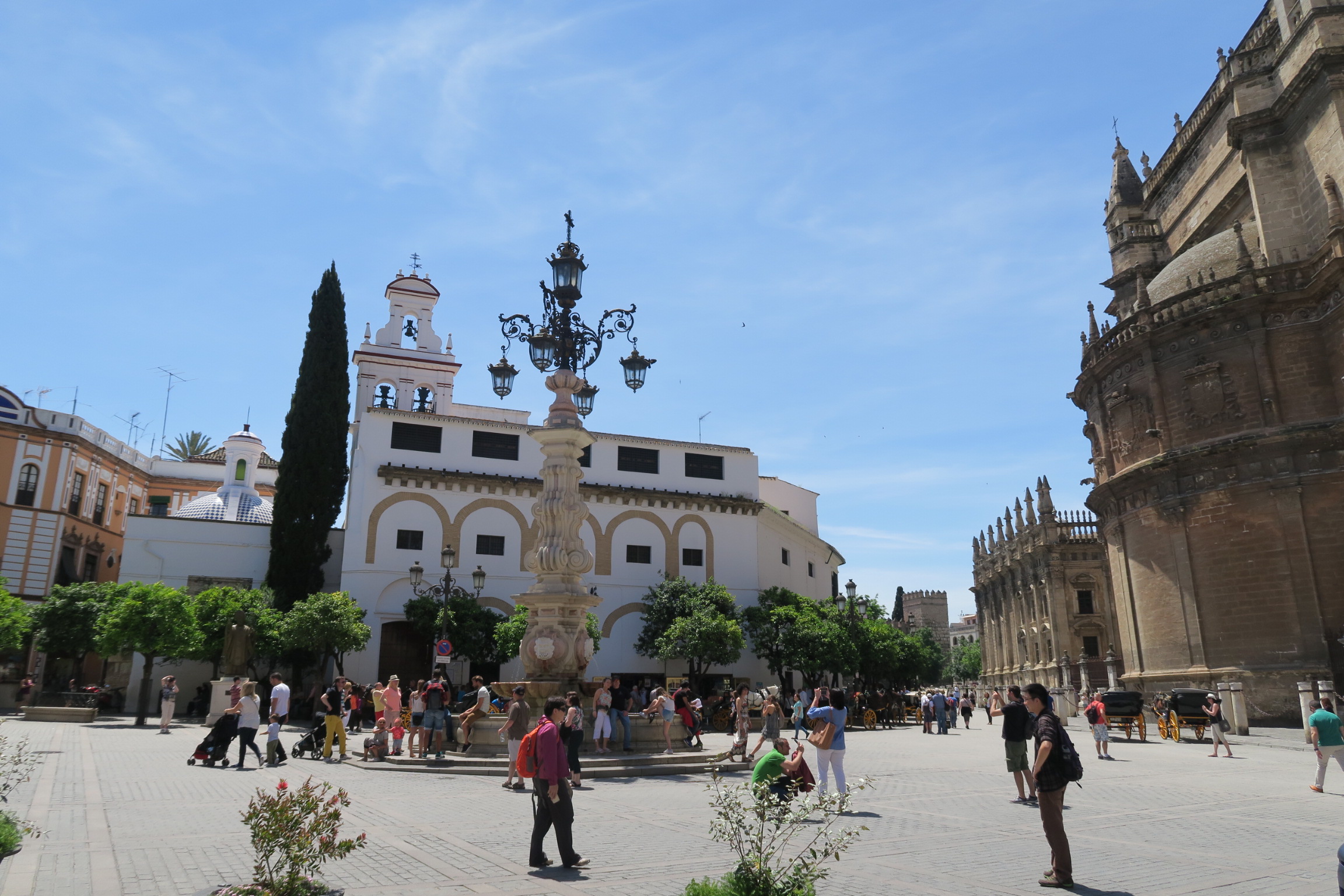 jojo:
what do i like?
-busy, busy, busy.  getting dropped off across our airbnb felt like we were getting plopped in the middle of a shark tank.  the city is smaller than madrid but i suppose that since it’s more condensed (ie: not well connected via transit like a subway), all the people are crammed into a smaller area.  a nice change from madrid
-the weather.  the temperatures finally started to climb upwards over the last few days in granada and by the time we got to sevilla, we were dripping just from the 10 minutes while looking to our place
-the streets are cleaner – i’d say every 20-30 feet in barcelona and madrid would have a few smoldering hershey kisses (aka: dog crap) on the ground; not necessarily caused by the owners but more from the amount of stray dogs.  sevilla seems to have the street cleaners out in full force and the chocolate nuggets are quite sparse

what do i dislike?
-gobs and gobs and gobs and gobs of tourists.  absolutely horrendous.  madrid was a much larger city with larger roads and even down grand via, it wasn’t as packed with foreigners as sevilla’s walkway towards the alcazar

what do i like/dislike about the new accomodations?
-pretty amazing.  big, clean, cool (thanks to the tile and shade), well insulated from the heat and noise while having great balconies looking down upon some patios)
-washing machine with english instructions.  the company that ran these rentals are definitely experienced and know how to keep their clientele happy.  with both english and spanish instructions, we were able to run a full wash & dry cycle as soon as we got there.  how sad is it that i’m getting excited about laundry?  travelling has definitely changed me and the things i’ve taken for granted
-on the downside, wifi was spotty though we had a workaround for that.  the bathroom, while having a fan, ran up a funky smell very quickly; it was reminiscent of the time spent in our lovely shower + toilet combo in seoul.

biggest adjustments from the previous stop?
-the heat.  we finally got a taste of that spanish heat that everyone’s been talking about and while we barely got to 30 degrees, it was dry and scorching.  it felt hotter than the philippines for some odd reason
-different eating schedule lol.  the nadius-conglomerate is much more civilized in their approach towards the ingestion of calories.  to date, i’ve gotten around this late eating schedule by adding day-long grazing to the equation rather than shifting my eating schedule.  problem solving skills will be put to the test here.

what was our first meal?
-a tapas joint close to midnight.  the four of us were all famished and it definitely wasn’t one of our better meals… a little pricier and my meal personally sucked since the one item i was going to contribute to our shared order was out of stock, forcing me to make a quick/rash decision to order the pesto pasta.  i’ve eaten napkins that had more flavour, literally.  those soggy napkins that wrap a burger or even a microwaved bbq pork bun… i would have gladly had a plate of either of those tissues in place of this bowl of pasta.  meh, anyways here’s some pictures to remember the meal by

overall impressions?
i like sevilla though i find it as kind of an inbetween type of city of granada and madrid.  on the one hand it isn’t as big as madrid and doesn’t have as many options (in terms of food, sights, extra things to do that don’t revolve around tourist itineraries with the exception of parks & graffiti hunting) and on the other hand, it isn’t as small as granada and the city feels like it lacks a certain charm that we experienced there.  it’s really hard for me to quantify that statement but it just felt as though anywhere we looked, be it the gardens, attractions, cobblestone walkways, mural’d out alleys and even the public squares with fountains/benches/people-watching, there was always something to catch our eye and attention.  granada has (unfortunately) changed my expectations for all subsequent stops in spain.  while our time there wasn’t very long, it was filled with so many solid memories.

Our airbnb was well located with lots of restaurant and shopping options. Living the carry-on life has made me pretty dependent on cheap clothing stores like H&M. When there are none close by as was the case in Granada, I feel a bit panicked. We are usually so busy running around seeing the sites, it gets hard for me to have to search out a clothing shop on the go. Normally I love wandering the streets for clothing boutiques with unique and locally made pieces but it’s just impossible right now when my current requirement for clothing needs to be cheap, non-wrinkle and machine washable which rules out all boutique clothing shops with the word “atelier” attached to it.

There are more tourists in Seville and it seems as though most of the shops and restaurants cater to this group. There are lots of tacky souvenir shops selling t-shirts, jewelry and flamenco paraphernalia.

This airbnb has been the most equipped apartment on our travels, it even has a dishwasher! It’s very roomy for the four of us. But for some reason, there is something in the apartment that kicked my allergies into gear and I’ve been sneezy ever since.

I really loved Granada for its compactness, free tapas culture and beautiful buildings & gardens. Seville has the same things but it seems to be a little less pretty/charming and with more tourists. But Seville has delicious tintos (red wine with lemon spritzer) which is super refreshing to have on a warm night. Our first meal was not memorable enough that I can’t really recall what I ate. My experience was better than jojo’s since I don’t remember eating sawdust. It did take us a really long time to order because there was only one waiter who could take our order. The bus boy who gave us our menus could only take drink orders and he could only speak French/Spanish. The entire ordering process was more complicated and took way longer than it needed to be. On top of it all, it was midnight and all of us were aproaching hangry territory.

Seville has its charms, there are lovely little squares where one can while away an entire afternoon with a nice cool drink and a good book.