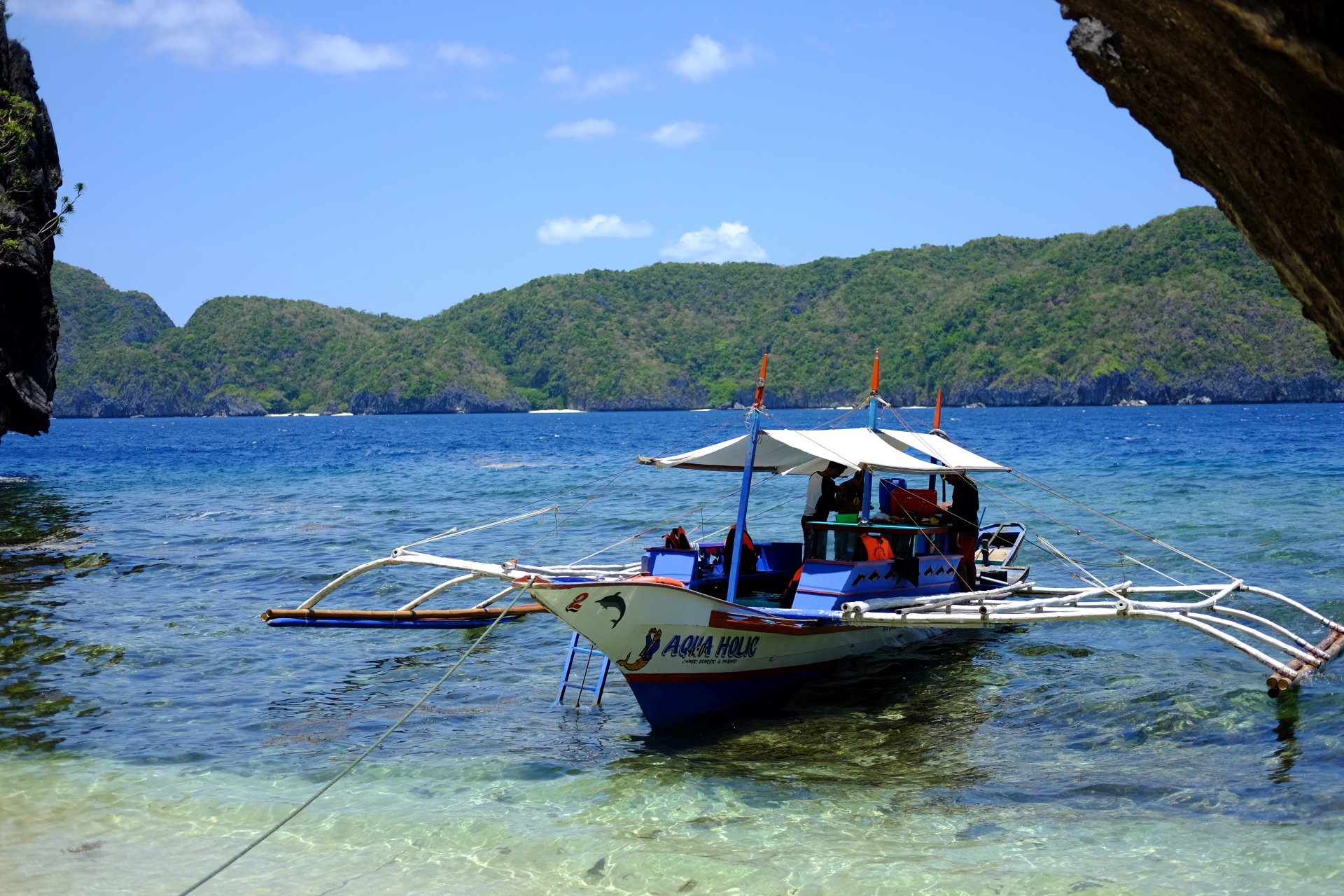 the philippines was so packed that i almost forgot about our day on the water in el nido.  from the city, there are a number of standardized tours that are on offer from virtually every activity store, convenience store and trike rider.  i had my doubts about a few things such as:
i) the quality of the tours – since the majority are doing their own thing, i expected crowd filled, over-hyped beaches.  not the case.
ii) getting taken for a ride on pricing – since the tours are standardized, so is the pricing.  i have to think that you have a little bit of wiggle room however we bypassed that option and got a discount by booking through our cottages, so the tour c for 1400pp came down to 1100.  note that you also have to pay a 200pp environmental surcharge for any activity and this voucher is valid for one week for other tours
iii) dying at sea – still can’t swim.  just had faith that god would take care of me

tour c is a package to hop around hidden beaches and shrines.  we left from a beach just outside of town and as we started around 930am, we were a little later than the masses which i feel worked out really well to avoid the crowds.  we suit up and board our ride for the day… the ‘aquaholic’

our first stop was helicopter island, a straight shot from our departure beach and about 20 minutes out.  named thusly so because it resembles a helicopter (though more like a whale by my eye). being one of the last boats to the party, we dock a little further from shore and have to jump into the water to make it there.  as clear as the water was, i couldn’t judge the depth and when i asked our (very young) guide to ballpark the depth, he signaled to his chest.  so i jump in and i feel like i’m back in sea scouts, halfway through drowning in the deep end of the pool.  the current is shaking me everywhere and i’m up to my forehead in water, swallowing gulps of delicious sea water.  i barely recall what i was doing in my panic but i think i tried jumping towards shore and gasping for breath each time i came up past the surface.  frank can probably attest that it was deeper than expected since he went first (though he has a few more inches of breathing room on me).  anyways, after we made it to dry land, the beach was very nice, VERY hot and we hung out for about 45 minutes before our next stop.  there were two rougher, rockier areas where many people were snorkeling and i now regret not getting my sea legs on this day

next stop was matinloc island, another 20 minutes away and apparently was the island that inspired the novel-turned-movie ‘the beach’.  no, i’ve never seen it and no, i don’t dream of leonardo dicaprio. but now that i’ve been there, maybe i will.  this time we stopped even further from the beach as the boats cannot dock with all the coral and rocks near this area.  frank and i take the plunge and try to swim our way over to the beach with our lifejackets on… a tiring exercise but definitely worth it.  there is a long sliver of white sand in between two huge limestone formations but this isn’t the ‘hidden’ beach.  there’s a narrow, rocky crevasse in the limestone rocks and if you slither through, you come through into a sheltered bay a few hundred feet long with shallow warm water and fine white/cream sand.  was too scared for our lives to bring our cameras with us for this portion so i pilfered this one.  the ‘rock walk’ would be at about 9 oclock off trailing off of the picture:

having finished up with hidden beach, we sailed north en route to the matinloc shrine on the western side of the island but not before stopping for lunch first.  the whole time that we’ve been docked, our crew has been cooking up a storm on the rear of the boat on their charcoal grill (which for the record, seems a little sketchy on a wooden boat).  we had half an hour to chill out on our little private beach and when we were done, were greeted with a lunch of grilled chicken, squid, eggplant, fruit salad, mango salsa and fresh mussels.

i’d have to put this day right up there with a neck-high powder day on the mountain.  never have i been to beaches this nice, secluded and warm before with great food and friends to boot.  so what do i do next?  on the way back to boat, i lose my footing smash my leg against some coral and also cut my thigh against a rock/coral pillar that was jutting above the floor of the beach.  F. M. L.  i get onto the boat and although it stings, i think that the blood is mixing with the water and it’s streaming out a little faster than it should be.  15 minutes later as we dock just past the shrine, i’m wrong.  it’s just blood and it’s running pretty healthily.  we stopped near star beach and while everyone else enjoyed the snorkeling with the oodles of fishies beneath us, i was getting tended to by our (very young) guide.  i have to say that while i was freaking out a little over the thought of getting hep from the very well-used brown stained bottle of iodine, karan has reassured me that it should kill everything it touches.  so if i do end up with hep, i’m buying a lottery ticket as well.  only time will tell.

and of course, star beach…

we had one more stop on our itinerary, ‘secret’ beach.  gimmicky i suppose but being the last stop for the day, gashed leg or not, i’m going to check it out.  haha isn’t particular comfortable in the water either but even she joined in the festivities after donning her flattering life vest, also in summer orange.

a short swim under a hole in the wall spits us out into a secluded, contained beach.  aside from one other boat, we have the area to ourselves since it’s towards the end of the day.  the strip of sand is small and the other half is more like a bay with small whirlpools where fish are swirling around at your feet.  the water’s amazingly warm too, reminded me of sitting in a warm pool of pee circa my baby days.  so.  comfortable.

we make our way back to the coast over the next 45 minutes.  the sun is slowly setting behind us as we cruise towards an orange glazed palawan.  salt water sprays us in our face and sometimes completely drenches us and it’s all good.  another tough day in paradise.  our crew thinks so too.

not much else to say other than i would definitely do this again.  i’m always on-guard about organized tours but our guide was very good, we had a fun crew to travel with and it definitely felt like we had our own areas to ourselves.  going forward, i’m not sure how other beaches will stack up.  maybe they’re all like this, maybe not… but i think i need to figure out something that pays well while doing very little during both summer and winter if i’m going to keep my sanity.