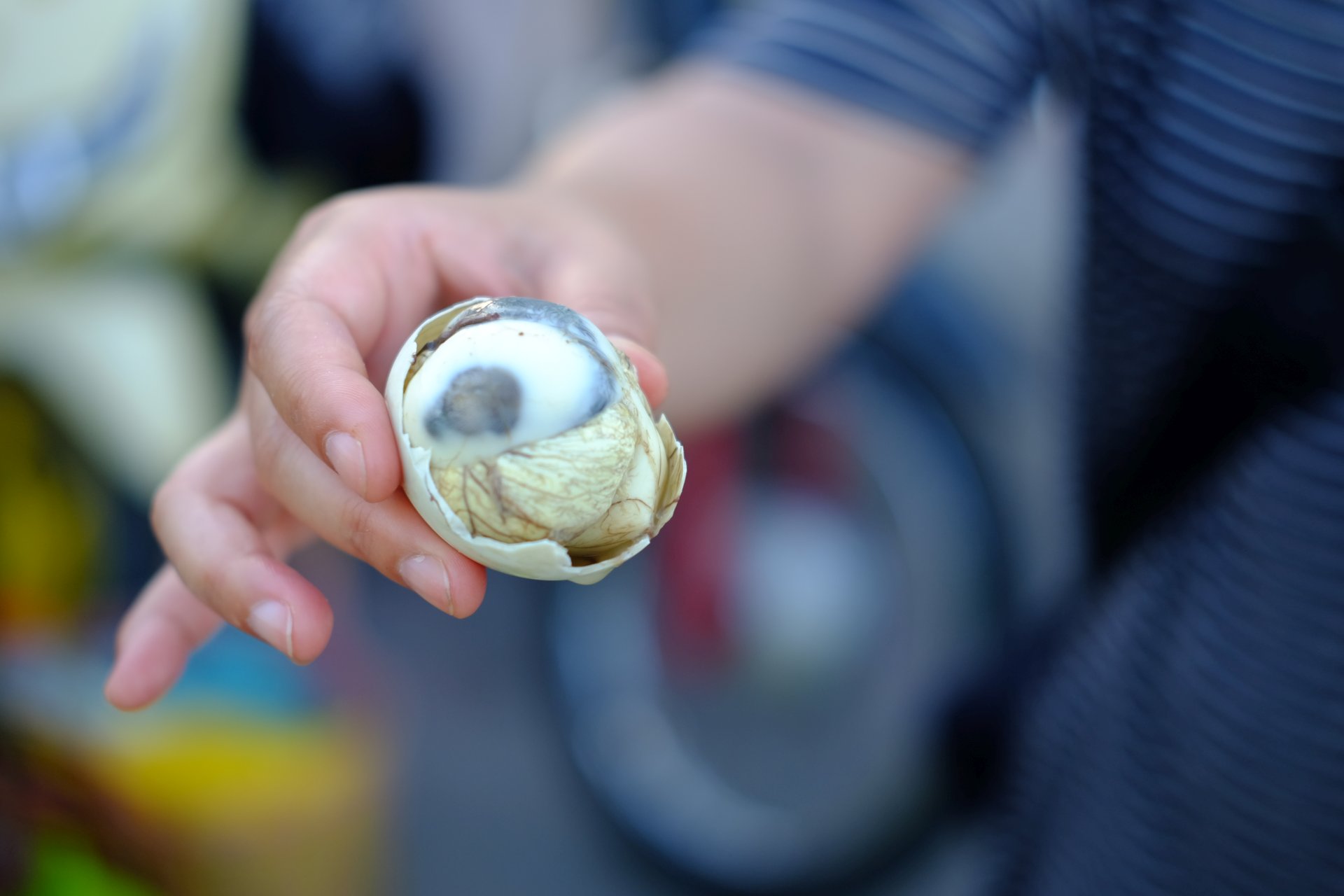 ah yes.  weird food.  i’ve heard much about balut but have never had the pleasure of seeing it up close and personal.  for clarification, balut is a partially formed duck egg that is ideally served at 16 days old.  from my limited research, i’ve found that duck eggs hatch in roughly 28 days so at 16 days, the embryo has started to develop and you’re lucky (or unlucky for some), your duck will have formed a beak and some feathers.

if it sounds like a fear factor meal don’t worry, i thought it was too.  having gotten brutally sick for 10 days and confident that i was going to die in china a few years ago, i backed away from this challenge.  haha stepped up to the plate so her, sarni and frank had a bonding moment together along with our driver, joseph.

this had been on frank’s hit list since he landed however we didn’t see a single stand in el nido.  sarni had discussed finding a balut stand with our driver for the day, joseph, but our searches came up empty as we spent the day visiting chocolate hills and the tarsier sanctuary on bohol.  on our way home we stopped by the tagliabaran wet market and mall to pick up some groceries to make a green mango salad.  as we were about to board the car, joseph pointed out a balut stand across the street and it was on.

i’ll give credit where it’s due.  from the first moment, the three never wavered from their decision.  it wasn’t a question of IF they were going to eat it, the only question was how long it would take to do so.

as all things that are weird, there’s a process to do so.  joseph lead the charge and sarni followed suit shortly thereafter.  the first step is to crack the top of the egg and peel open a little hole.  as the embryo has grown, there will be some ‘soup’ that collects at the top and you are to drink that first straight.

the next step is to peel the egg down to eat the rest in a big bite.  you can start to see the outline of the duck here…

haha didn’t get quite so lucky.  hers had feathers forming!

with the egg peeled open, you can put a sprinkle of rock salt on top and finish it off with a spritz of chili sauce.  joseph took his down like a champ so sarni went next.

i give respect for eating one egg but as soon as sarni finished he said ‘i need another one!’.  the man slammed two down before haha and frank even got going on theirs.  unreal.

haha was next.  after getting a little grossed out at her feathery egg, she went all in and took it down in one gulp.

frank was next.  i think the sight of the feathers and the little beak was a bit much but this is just speculation from somebody who ran from the challenge.  all i recall frank saying once he started on his egg was that it wasn’t ‘as bad as long as you don’t chew it’.  as he was saying this, i couldn’t help but notice that there was smushed balut all over his teeth!

all in all it was a great experience to be the designated photographer.  as we walked back to the car we noticed the lineup of tricycle drivers smiling and laughing at our group.  i don’t even want to know what they consider to be ‘crazy’ food.

the bohol bee farm, a complete review and recap

Rolling Through the Hills