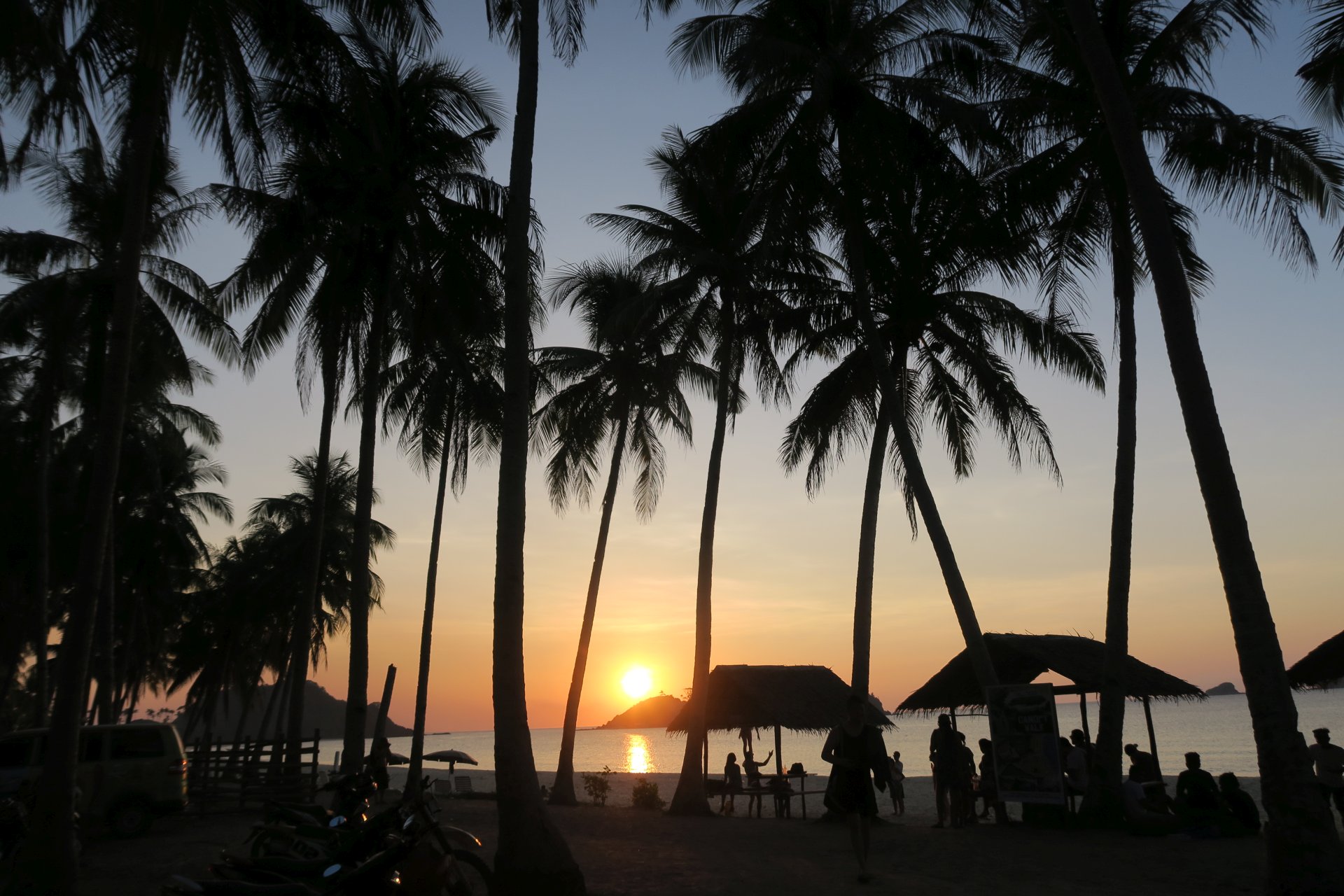 after napping until a late lunch on our first day in el nido we hired a pair of tricycles to head out nacpan beach about 45 minutes out of town.  we were able to get them down to 800pp per trike (two people per trike) but i feel like you could definitely get them lower (as starting price was a ridiculous 1500pp).

we’ve heard that it’s usually recommended to head out to nacpan in the morning and then to las cabanas for the sunset but i’d suggest otherwise.  maybe it’s because it’s shoulder season at the moment but nacpan was practically a ghost town by the time we arrived around 4pm.  we stayed for the sunset but left before it got dark and i would definitely recommend doing it this way for a number of reasons:
a) sand is much finer and cleaner
b) massively larger beach, more scenic
c) secluded; you can have a whole area to yourself (in our case, maybe 500m until the next set of people who’ve camped out)
d) water is warmer and clearer
e) less developed in terms of restaurants and cottage rentals

i’m hardly a veteran at beach vacations but this is what i’m picturing when anybody talks about that one great beach that they went to on their vacation.  if i’m not mistaken, nacpan was voted into the top 10 beaches in the world for 2016, not that i would have any clue what constitutes a world class beach other than no russians or european dance music.

towards the south side is a small peak that you can climb up to catch a glimpse of the twin beaches back to back; the nacpan side is prettier to look at in my opinion since it’s less developed and isn’t lined with boats.

in fact, i’d skip las cabanas altogether unless your only goal is to drink your face off.  maybe the only thing working against nacpan is the park eco-fee of 50pp which for some reason was discounted to 25pp when we went.  heads up, the road in is also very dusty so having a facemask is a really good idea.  definitely need sunglasses.

we wanted to stay until the sun had almost set but our drivers weren’t too keen on the idea.  we originally thought it was because they had wanted to get home earlier to score more fares but i can now say that i definitely don’t believe that to be the case.  frank and karan’s driver was the speed racer out of the two.  the one that haha and i got was younger, chattier and little did we know, had no lights on his bike.  not even in the rear.

as the sun was setting on our ride home, we would see oncoming traffic give us a quick flash to let us know that they were approaching.  it wasn’t anything aggressive, it just seemed like common courtesy.  since we were still behind frank and karan at the time we let their driver do the flashing or even leaving his lights on the whole way.  eventually we got left behind and that’s when the ride started to get pretty sketchy.  i didn’t have my contacts in for the whole ride but i could make out that we were straying into the oncoming lane and even passing other trikes in the complete dark.  the pessimist in me thinks that it doesn’t take much for another driver (without lights) to be coming our way at some point in our trip… thus creating the perfect opportunity to make a tricycle sandwich with human spread.  unfortunately for my negative side, someone was looking out for us this trip and we made it back to our cottages safely in the dark.  they had wanted an extra 200pp for the late afternoon and difficult ride home which we had no issues with by that point.

so yeah, nacpan beach.  worth every sketchy moment.