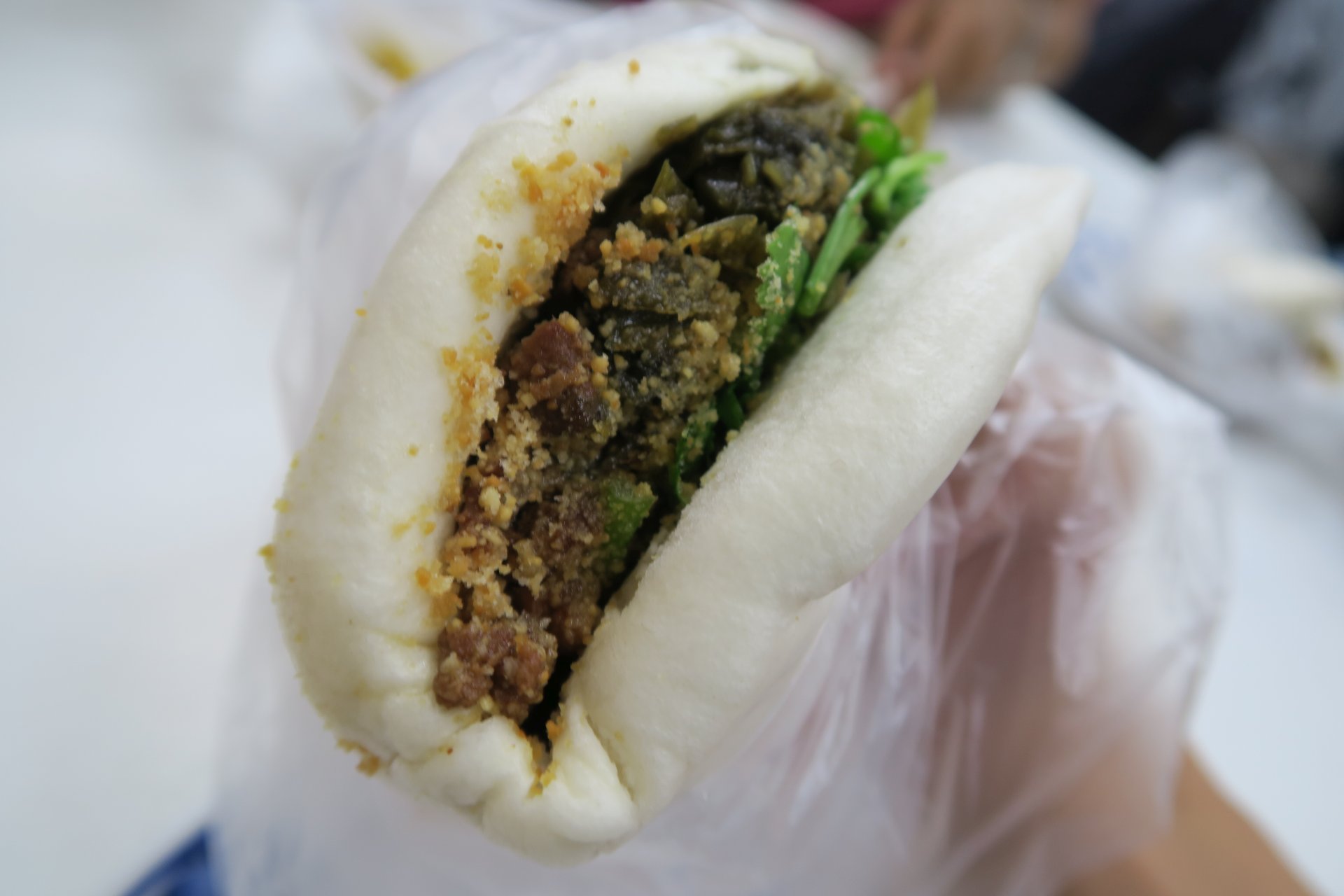 with my parents owning two ‘sandwich tree’ shops while growing up, i’ve ingested a good number of calories involving meat and bread.  as for home cooking, my fav dish that my dad would make was braised pork belly in a rich red/brown sauce.  it was only natural that i had to search out the love child of my youth, the gua bao.

it’s a simple, casual snack that you can pick up at the night markets.  i tried it at two different places, one in taipei (50nt) and the other in ruifang (30nt) and taipei’s lan jiu gua bao’s version wins out by a huge margin for me.  located in the busy gonguan university district, this small restaurant/stand had a lineup on each of our visits, sometimes as long as 30+ people aiming to grab takeout.  we opted to eat in since the lineup was always shorter.  frank and i were just coming from eating ice monster for dessert and were en route to eating san jeen pao and xlbs so the voice of reason told us to order only one bao each.

from the moment we handed in our order form to delivery of our food, i’d guess a minute had elapsed.  the bao maker up front is working non-stop and is uber efficient like everyone i’ve seen in taipei

so the bao itself…

-a soft steamed bun –  flat on the inside to hold the filling in place
-minced, braised pork – the options are fatty, lean or half-half pork.  we opted for half-half and i think it was perfect.  having the pork minced up makes for a much easier eating experience too.  the flavour was rich, you can taste the staranise in the meat but it’s not too strong
-mustard greens – marinated with both salty & sweet, exactly how my aunt cooks them
-crushed peantus – another hit of sweetness while adding a crunchy texture
-cilantro – a perfect balance to the heaviness of the pork

this might’ve been my single most favourite thing to eat because it wouldn’t consistitute a whole meal on it’s own so i’d be able to enjoy something else in addition to it.

the gua bao i ate from a street stand in ruifang was good in its own right but all the components of the bao from gonguan were just a little bit better and made the overall product that much more memorable.  i may have eaten about 50 something different things in taiwan and for me, this one little baby outshines the others by a mile.  to me, this is the embodiment of the flavours of taiwan.

a change of pace