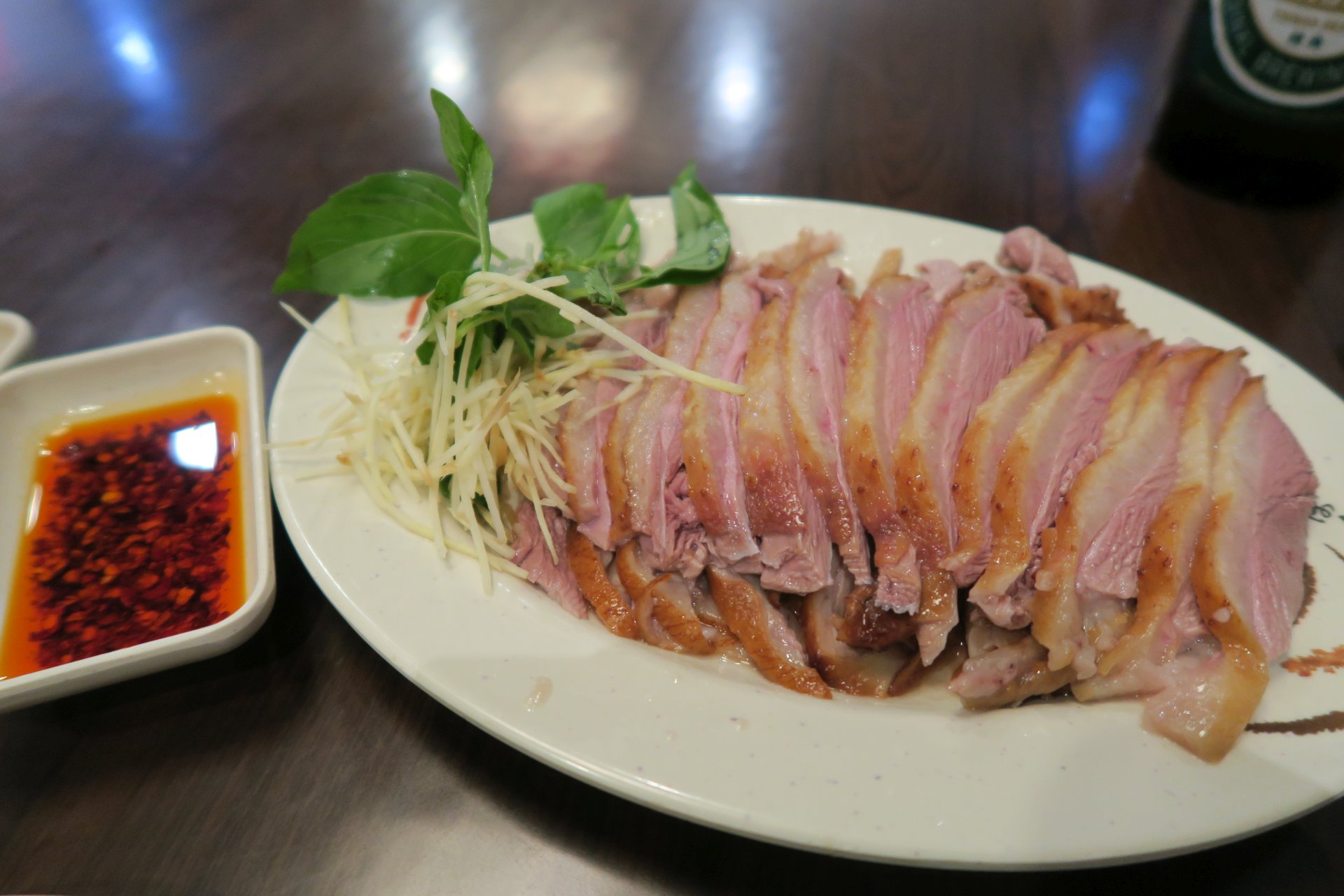 q. favourite meal
a. roasted goose/duck lunch.  i’ll eat chinese duck on occasion but i’ve never had goose before.  there was the option to get bone-in or boneless; we opted for the boneless as we already had a hard enough time with the menu, even with two mandarin speakers.  you also have your choice of chili, vinegar/plum sauce and their ‘secret’ sauce that’s very close to a neon orange that tastes slightly tangy.  they recommend to mix all three sauces into one bowl but it really didn’t matter, the goose was so damn good on it’s own.  the meat wasn’t moist, it was downright juicy.  the flesh wasn’t packed together very densely and each piece was sliced about half a centimeter thick so you could get a good meat to sauce ratio.  the skin was more moist than crisp and each slice had a perfectly even fat sandwiched between the skin and meat.  so money.

to you, korea, i say this: you tried your best to hold onto us and trap us within your grasp but we persevered through your stupid obstacles, dealt with your incompetent flight and security attendants, froze time and defied the odds to finally escape your horrific excuse for a travel destination.  FREEDOM.

most memorable moment of korea?  escaping.

q. greatest challenge
a. balancing off down days with busy days.  i think that the travel is starting to catch up with me.  being on the go all the time is exciting but in some sense it’s starting to make a ‘vacation’ not feel so much like one anymore.  i’m also starting to get stir crazy without anything active to do; think i might try to source out some tennis racquets in taipei or hong kong.  god knows that i need it before i turn into a dumpling

q. what i miss most from home
a. my chiropractor.  6 weeks of snowboarding alongside 2.5 months of random beds and pillows (minus 5 nights of westin’s “heavenly” beds), my body is falling apart.  my back will have good days and days where it feels like a 2×4 but my knees have been just killing me non-stop.  probably pushed it a bit hard in hokkaido and all the walking probably hasn’t helped at all.  man it sucks to be old.

q. next stop
a. hong kong

q. weirdest observation about current culture
a. the taiwanese are nothing like the mainland chinese.  after trips to shanghai and beijing, the hairs on the back of my neck stand up everytime i hear mandarin being spoken.  it’s a breath of fresh (maybe an exaggeration considering that this is still asia) to see that not all mandarin speakers are mongrels.  everybody i’ve run into over our first four days have been very polite, conscientious and aware of their surroundings.  i can’t believe it has taken me this long to visit the country but i can always tell it is somewhere i’d want to come back to.

q. one tip i would give myself if i were to come back
a. get comfortable riding a scooter.  it still feels like a deathtrap since scooters have a small box that they park themselves in when turning left (in the middle of the intersections) but it would really cut down the amount of walking in the city.  with taipei’s roads being quite wide and local drivers not driving like complete retards (like in china), i think it could be a different spin to the city.  it’d deserve extra points if i had a family of four by then and could fit them all onto one scooter.

q. friends i’ve hung out with/visitors
a. my snowboarding partner in crime, marsha-san.  best tour guide evah; definitely a 5/5 tripadvisor review coming up.  we’ll be joined by frank and karan tomorrow and will be hopping around with them over the next three weeks too q. one random/weird/cool thing i learned about the country i’m staying in
a. the food.  not only is the food my first draw for taipei nor is it because it’s so good but it’s so accessible.  food feels like it’s engrained into the culture here and you can see people of all ages and demographics eating together at restaurants, hole-in-the-wall diners and night markets alike.  two twenty-something girls dining at a street vendor with sleeping babies on the floor behind them.  seniors walking through the night markets and sitting down for a snack.  the city feels like it comes alive once the sun goes down; many restaurants don’t open until 5-6pm and there’s so many night markets to choose from.

q. one new experience/memory that will stick with me
a. our first 6 hours in taipei.  after a week of fumbling around in korea, everything just seemed to fall into place from the moment we landed in taiwan.  the bus ride went smoothly, we had a challenging time getting wifi at our meeting spot and she ended up walking into us as she entered the station.  a hole-in-the-wall beef noodle place for lunch, shaved ice for a snack, din tai fung for dinner and a few hours of walking through galleries, parks, art installations, shops, taipei 101 and malls made for one of the best “welcome to…” days i can recall.

q. portion of luggage that’s been the most & least useful
a. my flannel shirt and scarf have now officially been retired.  landing in taipei into 25 degree heat felt just as good as that first day in hokkaido powder.  my extremely limited winter wardrobe put in some serious work over the last two months and i’m really happy that i opted to bring as little as i did.  we cleared out about 6 pieces of winter clothes between the two of us and i think that anything covering up my forearms or shins will be sacrificed to the summer gods before we leave of taiwan.