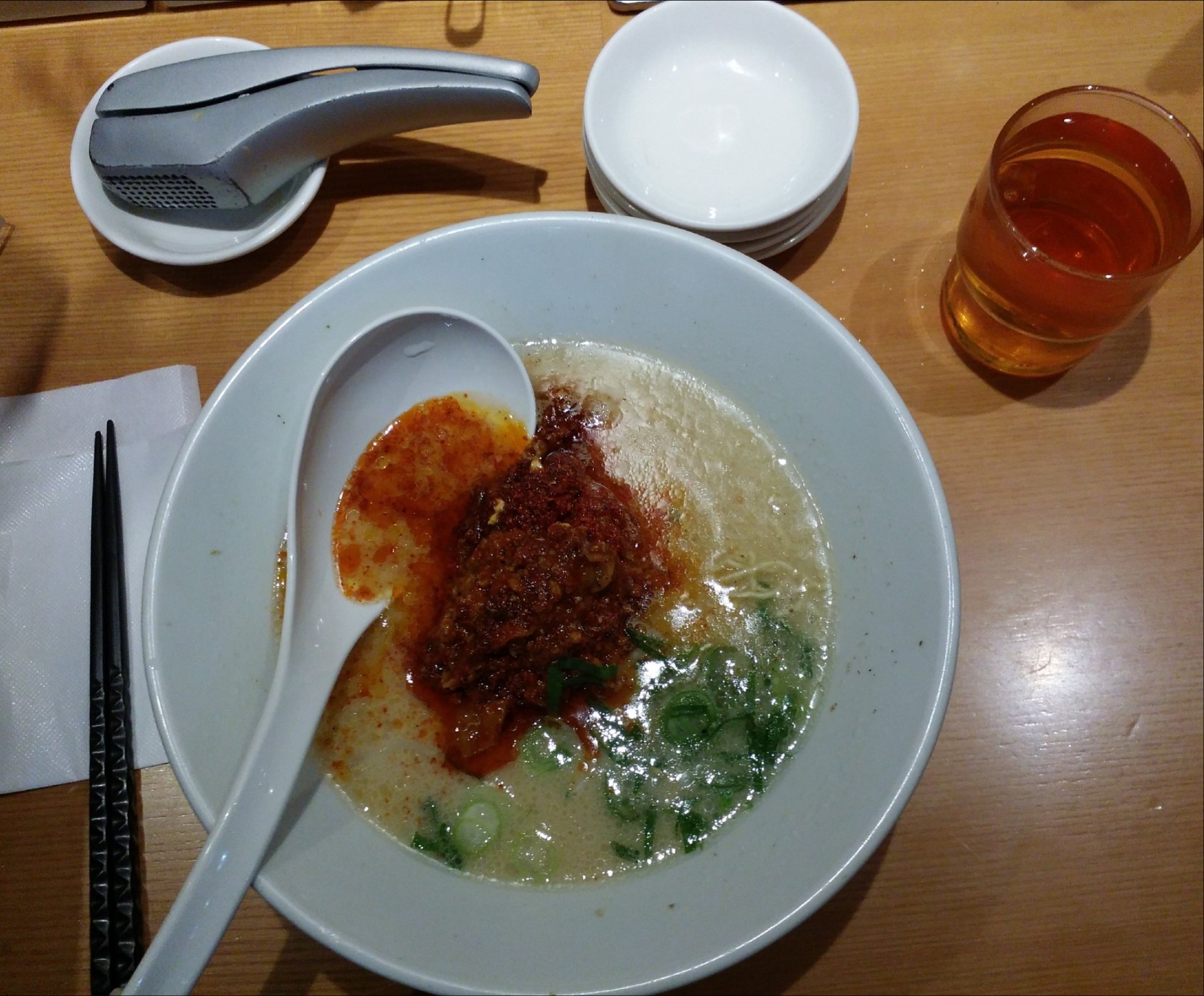 ippudo was a recommendation from our tokyo sensei, pablo.  he’s the master of all things tokyo and after he gave our group a hands on tour four years ago, if he suggests to eat/walk/jump, we do it.  we were coming back from mt takao and it was close to 8pm on a sunday night.  that really doesn’t mean much in shinjuku or even tokyo for that matter but for us that meant we were lazy and didn’t want to hoof it around town for some grub.

thankfully, ippudo is one of japan’s most successful ramen chains and has locations all over asia, not to mention in new york as well.  they serve hakata (pork/tonkotsu broth) style ramen which is what we mainly get back home.  there happened to be one across the street from us in a basement of an office tower so we stopped off on the way home.  the storefront had a very different feel from every other ramen shop we’ve been to thus far.  light wood paneling, modern decor and is much larger than just an eating counter.  there are multiple counters lining the exterior of the store as well as numerous tables.  easily the largest ramen shop i’ve been to in japan.

a glance over the menu lists there three options, all of which come with thin noodles.  i’m definitely more partial to thicker, firmer noodles (chewy even) so this is a completely new experience for me.  haha opts for the shiromaru classic.  i almost got the same but couldn’t pass up a chance at the spicy miso karaka ramen considering that this is the most famous fukuoka brand.  the karaka came with extra fine noodles… this’ll be interesting.

my first bite into the sea of red and i can remember my very first bowl from kintaro in vancouver.  the soup is super creamy but in a very different way from others that i’ve eaten.  i’ve always found santouka’s quite salty and kintaro’s can be overbearing sometimes with the amount of fat.  this bowl is a happy medium between the two and this is only the first of three components.  the miso ball has minced pork mixed into it that fans out as you mix the miso into the broth.  at a 3 out of 5 on the hot scale, it still had a kick with a mellow flavour boost.

the noodles… man the noodles.  the ultra thin noodles cooked to kata (firm) were a perfect pairing to the creamy broth.  i think the firmness of the thin strands allow the noodles to pick up more soup base.

i polished off my noodles so fast that i still had half a bowl of soup left so i ordered an extra helping.  no choice was given here and they cooked up an order of the regular thin noodles and although it was tasty, it didn’t mix as well.

haha’s shiomaru was clear, lighter and almost a healthy alternative when it comes to fat-laden soup.  i did say ‘almost’.  would definitely come back for another bowl.  120+ stores worldwide means they’re doing something right and that something is tonkotsu broth