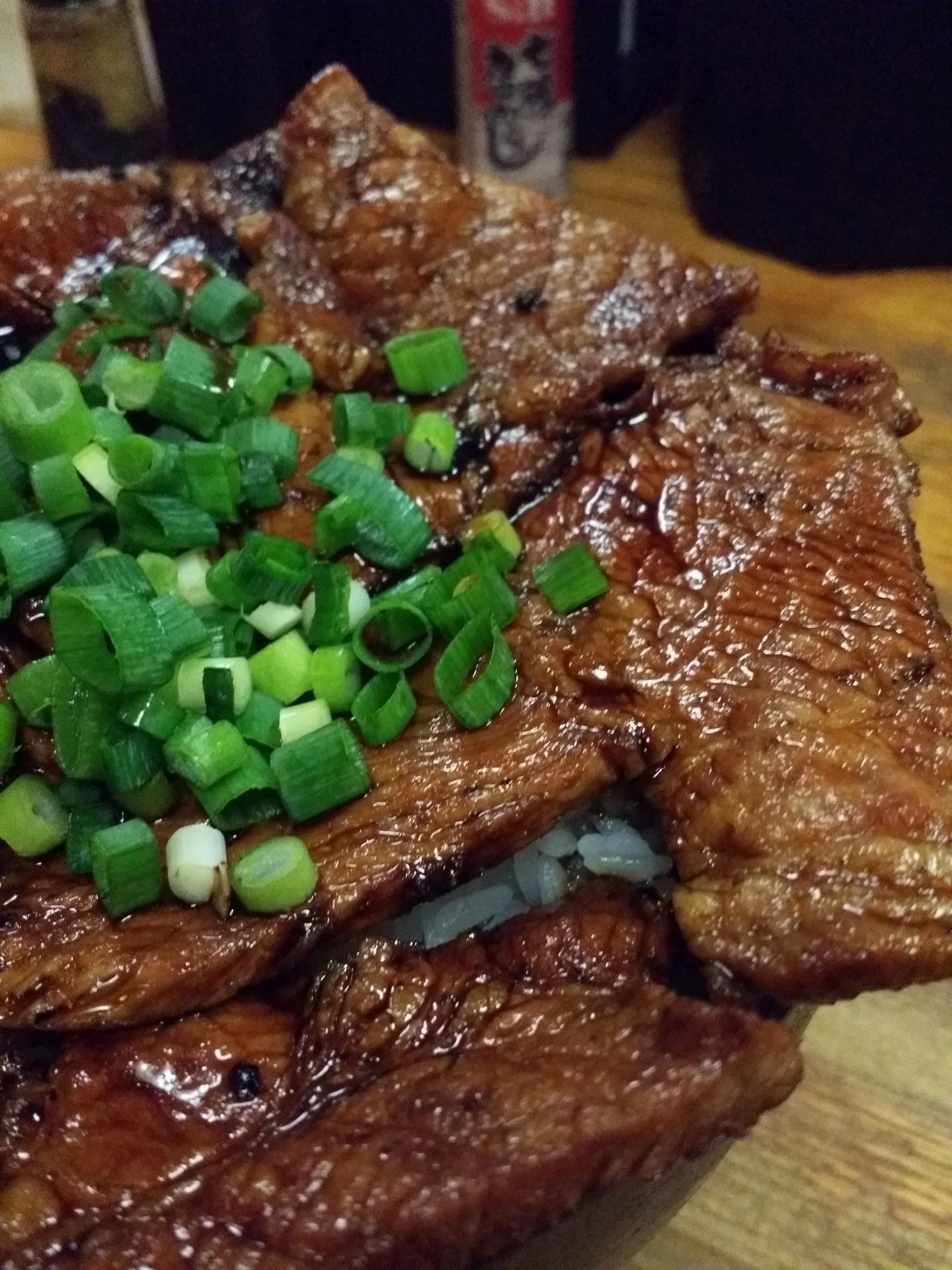 after trying tokachi ippin’s butadon in sapporo, we had to see how tokyo’s version compared to it.  it’s just a bit outside of the core stations of tokyo in ochanomizu.  even though we had the address we were walking up and down the street of restaurants for 10 minutes because it has no signage up front (unless you can read kanji).  we knew we were close because there was a really strong smell of sweet pork lingering along the whole street.  eventually we found the narrow entrance that lead to butayaro thanks to the decrepit poster taped to their stairwell.  a very dirty, unjapanese-like stairwell, i might add.

there was a lineup of six people standing in the stairwell, about a 15 minute wait (at roughly 9pm on a saturday night).  with each customer that walked out of the door, you could see a plume of smoke escape and hit the ceiling directly in front of the door.  years of this would explain why their walls look like this:

before we got in, we were asked to order first to speed things along.  the choices are slim with only small, medium and large as the options for the bowls themselves.  you can add sides on as well:  miso soup, onsen egg and pickled cabbage.  haha gets a medium, i get a large and both of us add an egg.  the egg comes out almost immediately and it’s very, very softly poached with a splash of shoyu.  the next 10 minutes that we’re waiting for our food feels like an eternity as we watch everyone around us inhaling their bowls.  a few things we noticed during the wait…

a look up the ceiling gets you a good view of the circulating smoke in the restaurant.  it’s thick enough to see but light enough that you won’t cough.  or maybe it’s supressing the cough with all that sugar in the sauce?  i don’t know but it smells really damn good.  if it came in a bottle i would buy it for haha.

we finally get our bowls and the large is enormous.  bigger than tokachi ippin’s by a longshot.

the pork is sliced thin, about half the thickness.  all the fat is trimmed off (boo 🙁 ) but the pork is literally pouring over the edges of my bowl.  the sauce is smokier and not as sweet either and the rice is nearly drenched in it.  as i grab my chopsticks i notice they’re much shorter, wider and there are no sharp tips on them.  these sticks were made for shoveling and that’s just what they’ll do…

nothing short of delicious.  the pork was tender enough to rip.  their tare was smokier and had a good balance of sweet and salty.  they were VERY generous with the rice.  i didn’t need the last 10 bites but took it down out of respect.  the egg was the icing on the cake.  if you want your egg to last all the way through a large i’d definitely suggest getting two, it’s only reasonable.

as i was waiting outside for haha to come downstairs i saw people go up the stairs one by one… one of those being an early teen in his school uniform.  as he got closer to the restaurant he pulled one hand out of his pocket and started counting out his change in anticipation.  love it.