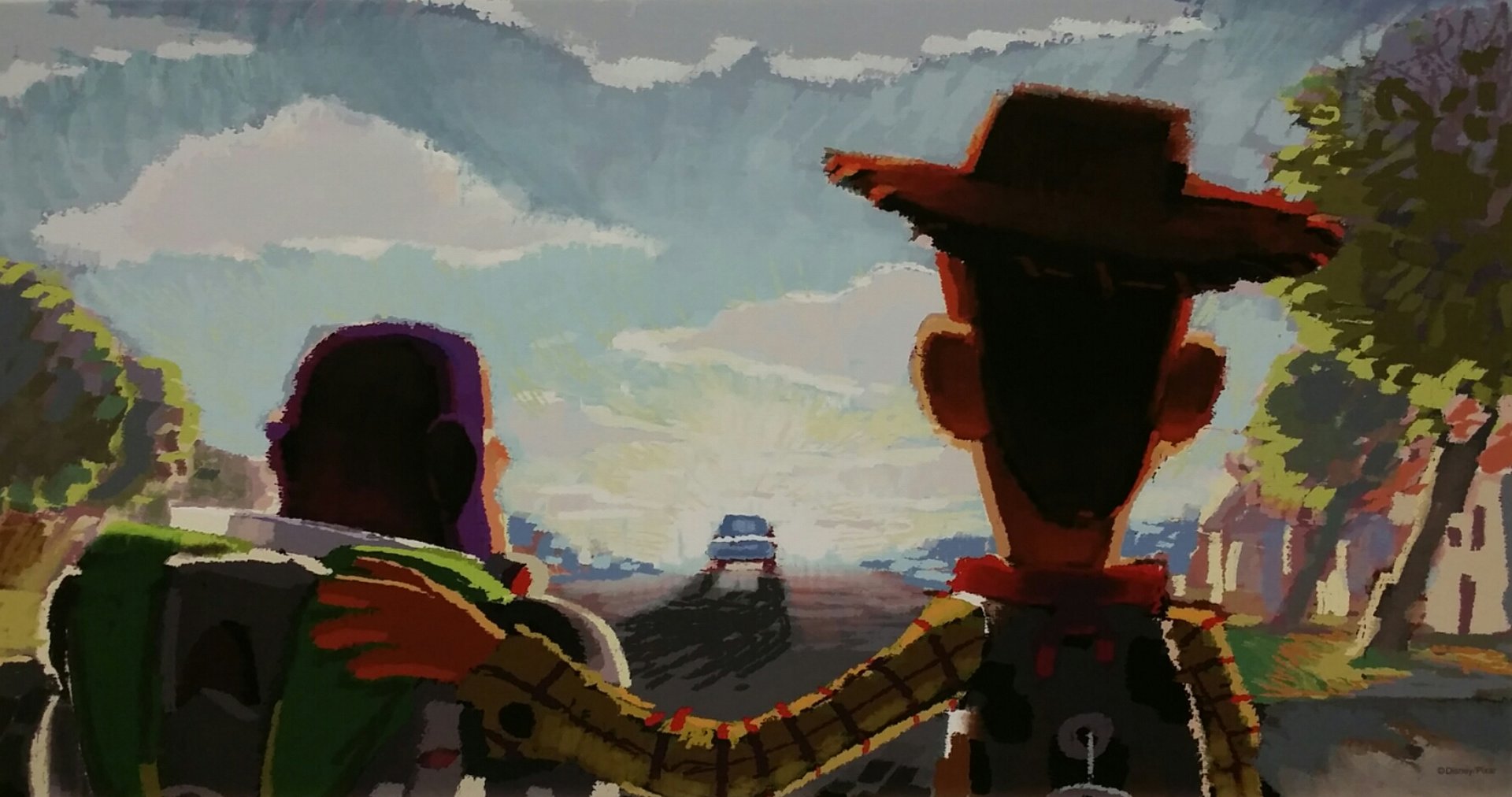 for our first full day in tokyo we decided to check out the pixar exhibit at museum of contemporary art.  it was on the east side of the city in koto and it took us about and hour to get there via walking and the metro line.  as you come out of the kiyosumi-shirakawa station, the signage to the museum is very good and they path you through a quiet neighbourhood mixed with residential and small storefronts.  even without the signage, it was easy to find your way there… just follow the japanese couples.

a 15 minute walk from the station gets you to the museum and it’s quite impressive.  not sure why they need such high ceilings when 99% of the population is under 5’8″.

unfortunately there weren’t any pictures allowed throughout the exhibit.  as much as i wanted to have some keepsakes to remember the various displays, i didn’t want to be ‘that’ guy… i just let the handful of mainland chinese tourists do that :/  the opening area was an intro and timeline giving us a visual of how pixar was formed and how it developed over the years.  i had no idea how influential steve jobs was to the company nor that the company started by making commercials (tropicana & listerine).  i  definitely nerded out a lot throughout the day.

the exhibit then moved onto the making of the toy story series… a room dedicated to the character, environment and storyboard development.  very cool to see a storyboard put up with pastel drawings of each scene; each scene had enough detail to make out the purpose as the colours were chosen to communicate the mood and tone even though there was no dialogue added.

the next room was a zoetrope of the toy story characters.  the illusion of motion is created by use of a device loaded up with various figurines in a motion sequence.  once the zoetrope picks up enough speed while it’s spinning, a flashing light kicks in to simulate animation.  my explanation is horrible but i did manage to find someone who recorded this from universal studios (exact same display):

next was a room detailing how the stories were constructed, even how detail is applied in layers to each individual scene.   two theater rooms followed that and they were each playing a loop of 4 short films that pixar has made over the years.  we watched one cycle then went upstairs for the second part of the exhibit.

the next room was the coolest one yet, a super wide angle projection screen playing a virtual world through large storyboard of pastel sketches.  these were the storyboards that we saw on the first floor but in a way that pixar has seemed to perfect, the floating camera flew in and out of each storyboard, playing a clip from each movie but in a simplified pastel/digital/cutout animation.  definitely the busiest room of the tour as people didn’t want to leave before the loop was done and even as it finished, they wanted to watch the start again.

the final room was the biggest and broke down the character sketching and detailing (ie: sketches of the queen in bugs life had detail on all the parts, even the ones we didn’t see.. ie: all angles of the antenna, where it was mounted to the tips.  are they bulbous or teardrop-like, which angle do they bend?).  you could see everyone pick out their favourites and linger longer than through the other movie displays.

and like every tour, all that buttering up led into a shop that was jam-packed with everything from postcards to children’s books to lunchboxes.  normally i’d be complaining about the smell of capitalism but c’mon, it’s pixar.  if i didn’t have a lunchbox for a suitcase, i would have braved the 15 minute lineup as well and left with a few trinkets of my own.

two hours flew by surprisngly fast and we looked for something close for lunch. since haha has been craving pho (as in an om nom nom way, not the pregnant way.  don’t even start) for weeks now (cutting thai son out of our diets cold turkey has not gone over well for her), it happened that there was a vietnamese restaurant in the museum.  1000yen for a bowl, side salad and shrimp chips… not bad.  the soup turned out to be much better than i expected though it lacked that slight dirty taste/seasoning that we’re accustomed to in vancouver.  the meatballs were more like tsukune rather than the chewy beef balls.  and tons of deep fried garlic and shallots on top.

we walked off this meal throughout the rest of the museum and stared blankly at some works by andy warhol and other pop artists.  these aren’t my pictures but this was one of my favourites from yuken teruya.  four mcdonalds bags each cut out in one long, intricate cut to produce framed trees when looking at the bag through the side

for 1500yen a person, the pixar exhibit was worth every yen.  each movie from the studio has extended the boundary of computer animation industry yet that’s only part of the story.  they place a such a large emphasis on developing characters throughout their movies so that viewers of all ages can feel connected to the storyline.  the exhibit was eye opening for me to understand how much time is spent on developing the plotline as well as refining all the details in the character creation > writing > scripting > storyboard process.  thousands of man-hours are involved in that process and then there’s the visual component afterwards.  the modelling, animation, layering, lighting, rendering… i’m sure i’ve missed a lot of steps which is why i’m watching these movies rather than making them.

in the end, i feel that there’s more to the movies than what happens during the run-time.  walking through this exhibit was a fun trip down memory lane.  we might be older, wiser and have more responsibilities (well, some of us) but it’s nice to be reminded that there’s a little kid inside of all of us.

One thought on “you’ve got a friend in me”