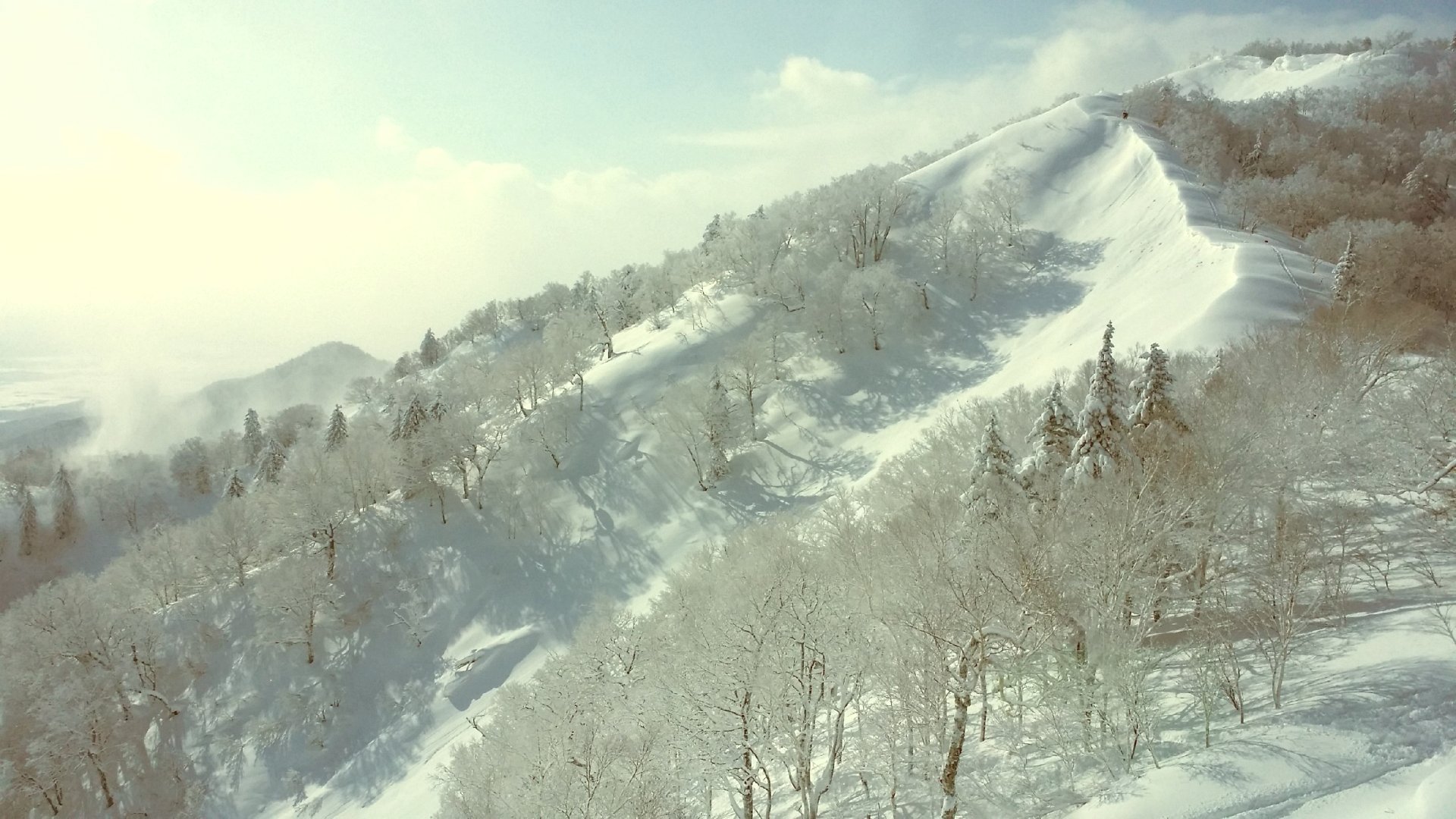 so with our asahikawa trip coming to an end and plenty of lounging around, i wanted to make the most of our trip up to the region that claims the ‘lightest powder on the island’. we were 8 days into our stay up north and i’ve only logged one day at kamui with relatively average conditions (though they were good compared to just 48 hours prior).  furano was forecasted to get about a foot overnight with relatively low temperatures but i went into this knowing that avalanche danger would likely be high as the snowpack hadn’t had time to settle with the spiking temperatures.  nevertheless, i’m here to scout it out so off i went.

furano is about 2 hours away from asahikawa so i opted to take the 6:44am jr line to furano for about 1000 yen.  i fully expected the train to be dead at that time but forgot that this was japan.  within 3 stops, the train was packed with schoolkids from elementary to high school.  most of the girls wearing skirts without leggings.  it was -8 and snowing like hell.  ffs.  anyways, from the jr station in furano we’re about a 10 minute taxi ride which came to 1330 yen.  first impression is that it’s a lot quieter and low key than even niseko (no aussies) or rusutsu (no ferris wheel).  i buy my lift ticket and walk upstairs to the gondola at 820am, expecting the gates to open at 830.  i see 20 boards, half of them swallowtails which is a great sign that i’m in the right place.  however i don’t see any people attached to said boards.  ok then, i scoot up and i’m very first in line for the gondola 🙂  830 comes and goes, gate is still closed.  840, still nothing.  845, a friendly kiwi shimmies up next to me and we exchange japan travel stories, digging for some info on my looming trip down south to hakuba.  finally at 850, everyone else funnels out and queues for the gondy, just about the same time that the sun breaks out.  my god, could it be a bluebird pow day?  the gates open and it’s a mad dash… i fumble my board cover (all gondolas require board covers to be placed on the noses since you bring your board inside) like a noob and i fall back to the second chair.  fack.  but it all works out as i land in a chair with a pair of austrians and an aussie who have been here for a week.  i’m told that this is *the* day to be up here.  with a fully exposed sun, warm temps and a fresh blanket of snow, i nod in agreement as all of us are grinning ear to ear.

i run out of the gondola, strap my bindings on and have no idea where i’m going but my new kiwi accomplice and i just set our noses down and go straight down the fall line under the chair until it opens up into a huge u-shaped bowl.  we smash 8 monstrously huge, sweeping turns.  i’m thigh deep on each turn and you can hear our screams echo through the mountain range.  on our exit we had no idea where we were going so we pick the line to give us the most speed to make it to the bottom… except that doesn’t exist.  unfortunately this is what i experienced throughout the day… because their ‘premium zone’, where the majority of the happiness is made, was closed, everyone was relegated to the middle of the mountain which was not very steep.  and having been to rusutsu and given all kinds of tree runs on tap, this was downright appalling.

i could only see some good lines from the link chair and some stuff mixed in between.  but due to variable visibility and both us being new to furano, we didn’t venture that far out of the way… spending half a day trip hiking out.  we spent most of the day hunting for stashes which is generally how i hate to ride.  always looking and hunting for something to nibble on.  a month ago i would’ve been open to this type of riding but having been spoiled at rusutsu, i was over it.

we ventured through two of their ‘gates’ up top that they deem for side/backcountry usage.  compare this to niseko and the two (a & b) that we went through left a lot to be desired.  out of a, we had a few hundred feet to traverse around a bend and then that opened into an open face that i have to guess is about a black-ish run.

5 good turns that lead into a low pitch tree run, similar to those on the side of rusutsu’s groomers and that then lead into a horrible 15 minute curling cattrack runout with one unstrapping point as you had to hop over a dam.  yes, a dam.  in this it could’ve been confused with a goddamn, as in one that i couldn’t give.  2 minutes into the runout i recall saying ‘that was totally worth it!  let’s lap this all day!’.  within 2 seconds as we got out of the runout, which was near the bottom of the mountain, i emphatically yelled ‘f*ck this piece of sh*t runout.  you couldn’t pay me to do it again’.  i was probably laughing as i yelled that but the sentiment was real.

we decided to try to switch up our luck and we did one hike up to the top of the b gate since most of the runs were tracked out by 11am-noon.  surprising since the mountain was not that busy.  awesome, awesome turns but wasn’t able to get more than 4 down.  those three runs would be my highlights of the day.  spent the rest of the day bobbing around on chairs and all in all, it seemed like it was mostly groomers.  there were treelines but nowhere near the length of niseko and not spaced as well as rusutsu.  you could ride them but you couldn’t hammer them.  trees on the lower portion of the mountain had better spacing but no pitch on those.  more snow wouldn’t have helped.  i’m trying to not sound like a snow snob but all in all, i wasn’t too impressed with the mountain.  i definitely feel that the premium zone would’ve changed everything but i find it hard to have faith in a relatively large mountain (especially one with two peaks) that is so dependent on one area.  there looked to be a few other spots around the mid mountain zone but not to the extent that i’ve seen elsewhere.  nevertheless, my thirst for powder remained by the end of the day and this proved to be good motivation going forward.  still glad that i was able to check out this mountain to see what it had to offer.

perhaps it was the commute or the early morning or the lack of my new zealand/vancouver/taiwan riding crew or mountain knowledge but i tried to replay the day in my mind on my 2 hour commute home via the lavender bus.

*note:  though i did have a diary entry recounting these events, i’m composing this post after having put in five powder days at teine and rusutsu.  i’ve tried to not sound jaded but overall feeling towards furano is that you should skip it as there are MANY better options in hokkaido.