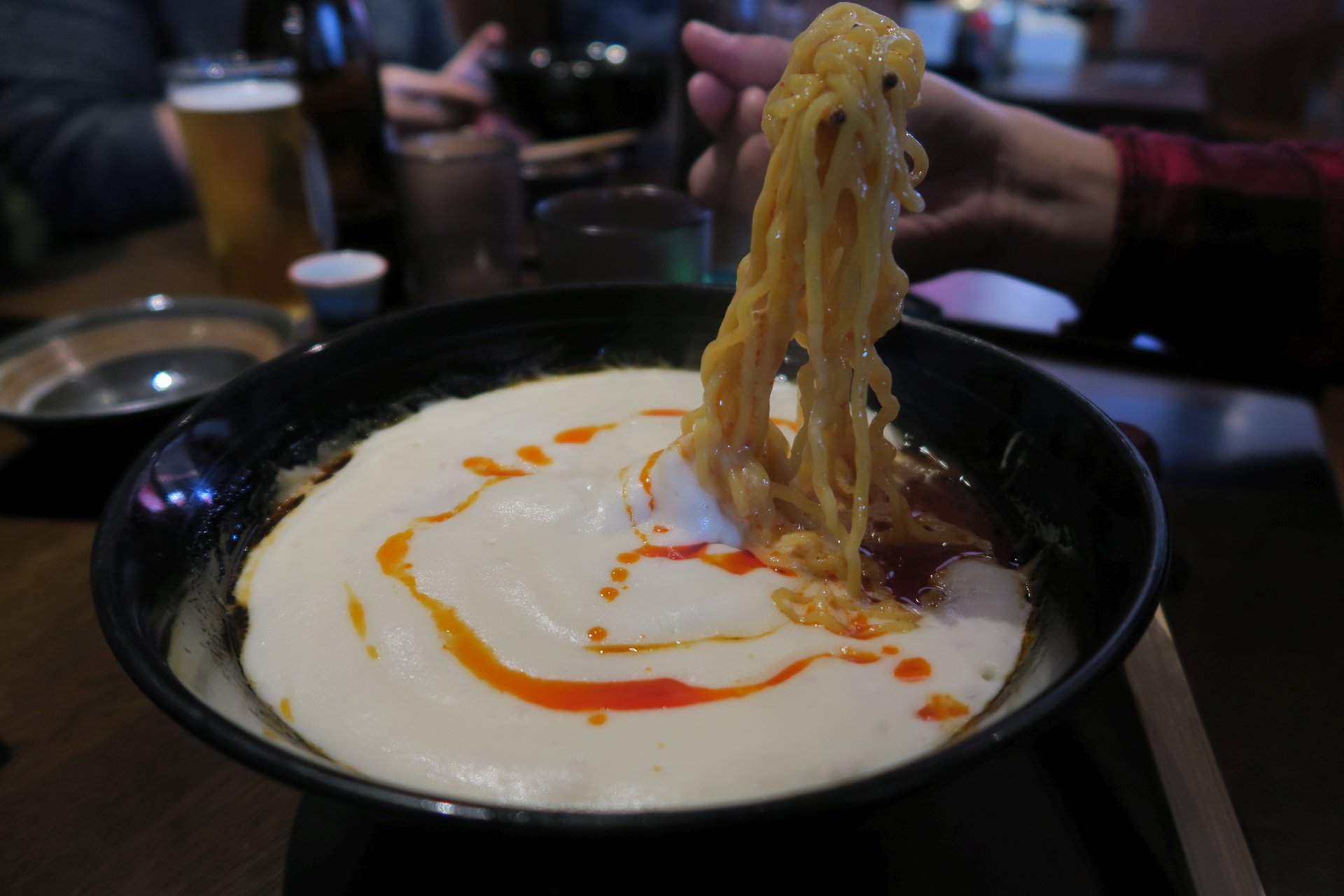 i’m notoriously awful at doing anything on a set schedule so this recap series might be an exercise in futility.  my hope is that it will provide some contrast with experiences as well as my state of mind when looking back at various cities but i guess there’s only one way to find out if it does…

q. current home/addy where i stayed and how long
a. 2 1/2 weeks over niseko (condo), rusutsu (hotel) & sapporo (airbnb)

q. favourite meal
a. potato foam spicy miso ramen + menchi katsu donburi in niseko.  i’ve been somewhat limited for food over the first two weeks at the resorts and being sick for 3 days in sapporo but this was definitely a stand-out

q. most memorable moment / best highlight
a. snowboarding in rusutsu.  the experience as a whole wins me over as you have some of the most amazing powder filled terrain all accessible by lift without any hiking.  the absence of people is what elevates the experience to being great since anywhere/thing desirable usually goes hand in hand with hordes of people

q. greatest challenge
a. i would say communication in general but having been in japan before as a non-japanese speaker, i had realistic expectations.  if there is anything specific that one would like to do, ask, see or eat, i feel it’s important to do your research beforehand so you can plan accordingly

q. what i miss most from home
a. my parents’ cooking which comprises of tofu, vegetables, bamboo and white rice.  having spent the final three weeks squatting at my parents’ home before flying out, i was gluttonously spoiled with sauce-soaked rice every meal.  noodles have been winning the war vs rice thus far in the trip and it has taken some getting used to

q. next stop
a. asahikawa, hokkaido.  it’s a 90 minute ride via a jr express train.  asahikawa is our base for a week; it’s close to a number of mountains that boast drier snow since it’s colder and further away from the ocean.  our miso ramen (birthed in hokkaido) diet will likely continue as well

q. weirdest observation about current culture
a. each time i come to japan, i find myself comparing their processes to the ones we have back in canada and that usually leaves me scratching my head.  there are so many things that vancouver does ass-backwards and then here, everything is done in the manner that makes the most sense.  at vancouver’s current rate of progression, we might have a transit system that loosely resembles japan’s sometime late in my afterlife however by then, japan would likely be in a state that didn’t require a transit system at all

q. one tip i would give myself if i were to come back
a. get an international driver’s license.  with the last 2 1/2 weeks being geared primarily around snowboarding, having a car opens many options in terms of day trips as well as lodging options (cheaper and bigger as we had a group of 7 that needed to be split up in rusutsu).  i don’t regret not having it for this trip since i feel that you have to get a lay of the land first but if/when i come back with a group of friends, i would definitely want to do some exploring on our own timetable

q. friends i’ve hung out with
a. this leg included friends from new zealand, taiwan, hong kong and even vancouver.  our group of 5 met up with another larger group in niseko from hong kong & taiwan and then we poached a few members from them for our rusutsu and sapporo portion.  there were lots of laughs, turns, beers and gopro videos that were shared and with them, many memories

q. one random/weird/cool thing i learned about the country i’m staying in
a. niseko blew my mind in terms of how many foreigners we were wading through.  from australians to europeans to chinese, it’s quite the melting pot of tourists and i would likely not do it again.  it’s not racism if i’m discriminating against my own race, right?

q. one new experience/memory that will stick with me
a. as we were on the train from sapporo to otaru to check out the snow festival, we were passing beaches and seeing surfers out in the bone chilling water.  i can’t remember a time in my life where i’ve seen a large body of water meeting a snow crusted land mass (with a couple feet of freshly fallen snow) and it’s pretty amazing to take in.  so much beauty out here and not enough warm clothes to take it all in