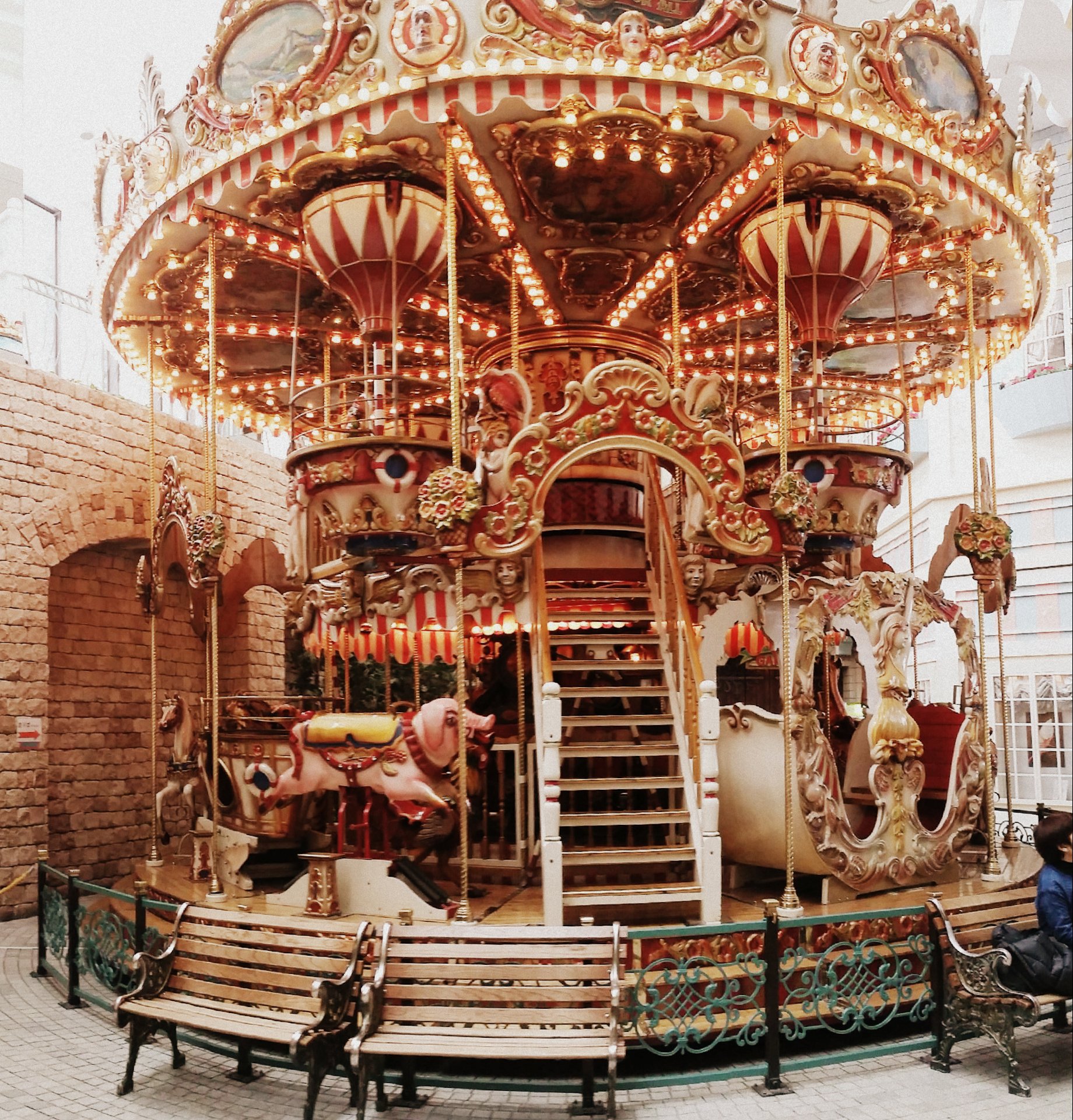 apologies for the lack of posts in the last week.  our five days in rusutsu was the most jam packed amount of riding i’ve ever done and then i’ve been laid up the last two days with a flu and a stomach bug since we made our way to sapporo.  hopefully this flu hasn’t burnt off too many of my brain cells… this is what i remember about rusutsu…

we pull into the parking lot of the rusutsu resort (only one of two hotels in the very quiet confines of the mountain) and the feel is instantly different from niseko.  if niseko was a rock band, rusutsu would be a band that performs on children’s tv shows in costumes weirder than what george lucas used in star wars 1-3.  the first thing i read up about this place was that it’s one of japan’s best kept secrets in terms of powder-filled tree runs and the second thing was that they’re well known for the talking tree.  yes, you read that correctly.  that’s supposedly one of the draws to this place.

if michael jackson ever invested some money into trucking in snow to never-neverland ranch, this is exactly how i would picture it.  the rusutsu resort is a winter wonderland for kids.  they’ve got an arcade, a massively unnecessary carousel, a winding corridor of european themed restaurants and shops selling everything from pizza to katsu curry to snowboarding equipment to arts and crafts.  even odder is that they’ve invested a big enough chunk of money into the place that they have a 3 car monorail that runs across the street to shuttle people between the two hotels (and two sets of hills as the resort is split across 3 different peaks).

it’s really an all inclusive resort geared towards a weekend getaway and never having to leave the confines of the hotel.  unlimited onsen usage, breakfast buffets, short walks to the lifts and easily accessible food off the resort if you’re willing to brave the storms.  our first night’s meal was at pirateman izakaya, named so because the head chef tends to wear a bandana and resembles a pirate.  this was our first excursion off the resort in blowing conditions and looking back at it, we only had 2 roads and 4 buildings to choose a path from but we somehow picked the wrong one by a longshot.  we ended up in a dead end of a road below the restaurant (visible to us) and half our crew split up to double back in the storm while the other half slogged their way uphill in waist deep powder.  finally making it to our destination, the menu didn’t look anything like what you would assume an izakaya restaurant looks like with only a handful of options but we managed upon a few golden nuggets of goodness.  their top dish would had to have been their potatoes au gratin which is a pretty popular dish in hokkaido due to potatoes being grown locally.  their potatoes already have an added hint of creaminess to them but these spuds were cut up, baked in cream and bacon and topped with cheese and breadcrumbs.  believe me when i say they were so good that nobody even had a chance to snap a picture of them.  oh, and how could i forget about the free steamed potatoes and butter they have as a self-serve stand in the lobby after you’ve finished a day on the mountain?  awesome!

as a whole, i’d say i quite liked the rusutsu experience though i’m sure a bit of that could be attributed to us staying at the westin.  very low key getaway without the hordes of australians that niseko is known to attract.  now as for the snow, where do i begin?

we arrived in the early afternoon so we opted to ride at night time for only 2300yen (~$27 cad). like niseko, their snow report didn’t stand out at all, with a few cm forecasted for the whole week leading up to our visit.  only 1 out of the 3 mountains were open for night riding with two lifts in operation but it felt a lot like cypress riding.  quick laps, no lineups and about 20cm of fresh anywhere and everywhere we looked.  we had planned to get a few turns in to scope out some terrain and ended up riding about 4 hours; nothing seemed to be getting tracked out no matter how often we lapped it.  at this point we were drooling for tomorrow morning…

our first full day on the mountain started with a breakfast buffet at 730am.  at niseko we just grabbed anything we had in the kitchen and b-lined it for the lifts but here, we could take our time to load up on calories… and how necessary it was.  out of dumb luck, all of us spent a few minutes to set our bindings back a few cm in anticipation of some of the goodness.  a measly 5cm fell overnight (which from our stay in niseko, know that meant about 3x as much snow at the very least) and our brains and legs weren’t ready for the craziness that ensued.  by way of my laziness, i’ve had a few days to compose my thoughts on this first day of riding and i still can’t find the words to do it justice.  it was borderline snorkel weather.  we were up to our eyeballs in snow, sitting stashes were easily thigh, if not waist deep.  faceshot after faceshot bordering on drowning in the fluffy goodness.  rewind back 48 hours and i was saying that niseko powder was the lightest snow i’ve ever ridden through.  scratch that from the record.  EVERY single run this day ended with my goggles getting fully caked full of snow on the inside of the lenses.  i would’ve been annoyed had i not been grinning ear to ear.  to this date i’m still not sure if it was the nose bridge or the bottom vents letting the snow in but this wasn’t happening in niseko.  this is kinda what we were dealing with:

day 1 – finiding out what rusutsu is about

it was, hands down, the best day of snowboarding i’ve ever had.  it encompasses everything i love about the sport; fresh turns, freedom to roam anywhere you want on the mountain, exploring new terrain at your leisure, not being dictated by lift lines and ripping smile-filled turns with friends.  untouched tree lines all day long, zero lift lines to deal with (worst one was about 10 people deep), what they lack in steeps they make up in deep.

as the days went along, the forecast would continually call for between 1-3cm of snow per day.  we’d wake up to bluebird skies within a few hours at most, the clouds would roll in and snow would be coming down so heavily, we’d be riding refills every run.  with the snow falling at a much lower temperature (-10 degrees celsius or colder), this makes for very light powder that doesn’t clump up as more people ride through the same area.  by the fourth day we actually had our first day without consistent faceshots of powder and it was a nice change to see the sun for most of the morning.  looking up through the sparse tree fields broods relaxation seeing the snow crusted branches and trunks.  this is zen.

as if all of this wasn’t enough, rusutsu has also built up a supernatural park similar to the one up at baldface lodge back in bc.  it’s a series of massive terrain park features but built into the natural slope of the mountain with no grooming whatsoever.  not that we had any intention to hit any of these things (as my medical insurance isn’t quite ‘that’ good) but we had to cruise by and check it out.  an average of 14 meters of snow a year would make for some pretty amazing runs through this course

dear rusutsu, you have ruined me in terms of snowboarding anywhere else in the world.  i might get lost in the moment and find another temporary sanctuary somewhere else but it’s only because i can’t be with you full-time.  i was legitimately a little sad that we were leaving but it came at a good time… everyone in the crew was starting to get a bit beaten up from the long days and after having ridden 9 out of 10 days, our bodies were actually ready for some r&r (rest and ramen) in sapporo

3 thoughts on “this is rusutsu. in all it’s quirky and powder-filled glory”